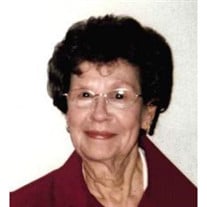 SHRINER Eileen A. (Pleitz) Eileen A. (Pleitz) Shriner, 93, beloved mother, grandmother, great-grandmother and sister, passed away on November 4, 2014, after a brief illness. She grew up in East Toledo and graduated from Central Catholic High School, in 1939. Eileen attended Davis Business College and subsequently worked at Toledo Trust Bank where she met Donald. On their first date, he told her he was going to marry her. She didn’t believe him, but their courtship continued after his enlistment in the U.S. Navy during WWII, and they married when he was on leave in the spring of 1944. After his service concluded, they started a family, and she became a full-time homemaker until her youngest child was in high school. She volunteered with Blessed Sacrament School’s PTO and as a room mother, served on the Rosary Altar Society, with the Girls Scouts and Cub Scouts, at Toledo Firefighters Union events, and at many other church and school events. Later she worked in the catalog department at JC Penney. Eileen was an excellent cook and enjoyed learning about nutrition and health. When she and Don retired, they traveled extensively—to all fifty states, to Mexico and throughout Europe. Eileen and Don enjoyed spending winters in Florida. During retirement, she was an active member of Blessed Sacrament’s quilting group, served on Blessed Sacrament’s funeral luncheon committee, and was a lay Communion distributor for the parish homebound. In addition, she volunteered at the Wildwood Manor House for 20 years. She will always be remembered for her generous easygoing nature and devotion to family, friends, and community. Eileen’s greatest accomplishments were her strong family and a long marriage that was happy until the end. She was a wonderful foil to Don’s humor and they loved to be together. We hope they are holding hands and catching up in heaven. She was preceded in death by Donald, her husband of 67 years, grandson Erik Eagle, and recently, her sister Corinne Grant. She is survived by her brother, Dale (Del) Pleitz; her children, Marty, Dave (Connie), Ellen (John Sakowski), Margo (Pete Eagle); grandchildren, Jennifer (Sloan Callen), Anne (John Grace), Nick Shriner, Michael and Gregory Sakowski, Lauren, Katie and Julie Eagle, and great-granddaughter, Charlotte Grace. Friends are invited to visit from 2-6 p.m., Sunday, in the Ansberg-West Funeral Home, 3000 Sylvania Avenue, (between Secor and Douglas Roads). Friends may also visit on Monday at Blessed Sacrament Catholic Church, 4227 Bellevue Road, Toledo, OH 43613, from 10 a.m. until the funeral mass at 11 a.m. Monsignor Michael R. Billian will officiate. Entombment will be private. In lieu of flowers memorial contributions may be made to the Donald R. and Eileen A. Shriner Memorial Scholarship for Blessed Sacrament Parish School or to the Wildwood Manor House. Online condolences may be sent to the family at www.ansberg-west.com

The family of Eileen A. Shriner created this Life Tributes page to make it easy to share your memories.