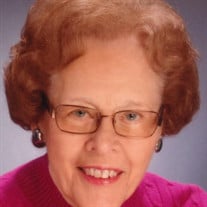 Elaine M. Walz, 93, a lifelong resident of Toledo, Ohio passed away on June 17, 2020 in Kingston Residence of Sylvania, where she has lived for the last two years. She was born on December 26, 1926 to Evelyn and Clarence Betz. Elaine’s early years were spent at Blessed Sacrament in Toledo and she went on to graduate from Notre Dame Academy, class of 1944. She and her husband, Ken were world travelers seeing most of the United States, and much of Europe, Russia, South America and Australia on their 25 plus cruises. Summers were spent boating on Lake Erie with family and friends always included. Her love for reading started at an early age with Nancy Drew books and continued with popular titles over the years, with a strong emphasis on history and anything about Abraham Lincoln. She enjoyed gardening that was sparked by her Dad at a very early age. She and her husband owned and operated Toledo Elevator for many years. In 1977, Elaine opened Talls of Toledo, a ladies tall clothing store out of a need for herself, her daughters and the area. Over the 22 years the store was open, many great "tall" relationships and friends were made. Elaine was a longtime member of Christ the King Church. She volunteered often and was an active member of the Over Fifty Group. She is survived by her loving children, David (Linda) Walz, Karen Connell, and Judith (James) Cook, 7 grandchildren, 3 step-grandchildren, numerous great-grandchildren and 1 great-great grandchild. She was preceded in death by her husband Emil Kenneth Walz. Friends are invited to visit after 9:00am on Monday June 22, 2020 at Christ the King Church, 4100 Harvest Lane, in Toledo where a memorial mass will follow beginning at 10:00am. Per her wishes, her cremated remains will be interred at a later date with her parents and family at the Historic Woodlawn Cemetery. Memorial contributions may be made to Christ the King Church or a charity of the donor's choice in her memory.

Elaine M. Walz, 93, a lifelong resident of Toledo, Ohio passed away on June 17, 2020 in Kingston Residence of Sylvania, where she has lived for the last two years. She was born on December 26, 1926 to Evelyn and Clarence Betz. Elaine&#8217;s... View Obituary & Service Information

The family of Elaine M. Walz created this Life Tributes page to make it easy to share your memories.