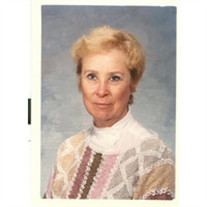 Elise Scott Connin passed away after a brief illness on Wednesday, November 5, 2008 at Hospice of Northwest Ohio.? Elise was born in Toledo, Ohio on January 11, 1926 to Lawrence and Elizabeth "Lily" Scott Keddie.? She attended Nathan Hale elementary school and DeVilbiss high school, graduating in 1944.? After high school, Elise attended The University of Toledo as an education major, where she was a member of Pi Beta Phi sorority. In 1948, Elise and Thomas Connin of Toledo married in St. Lucas Church. He preceded her in death in 1971. Elise began her teaching career with Toledo Public Schools, primarily at Glenwood, DeVeaux, and eventually at Elmhurst where she taught fourth grade for many years. She earned a Master's degree in education from UT. ? After 34 years with Toledo Public Schools, and many lasting friendships, Elise retired to a busy new career of volunteering and caring for her grandchildren.? She remained active until her death with Elmhurst Teachers and Library Association, DeVilbiss Class of 1944 reunion planning, as a member of Christ Presbyterian Church, Lamplighters and Westchester Dance Clubs, and with the Flower Hospital Auxiliary serving as both an escort and as a "Frog Lady" who crafted handmade "Frogs" for children undergoing surgery. Preceded in death by her parents, brother, and husband, Elise is survived by her sons, Lawrence (Mary Jo Borden) of Sylvania, and Dr. R. Scott (Tamara) of Bradenton, Florida and grandchildren; Thomas of Sylvania, Jodie VonSeggern (Byron), Madeline and Chase, all of Bradenton, Florida, special friend, James Bancroft, as well as her extended family in Scotland. ? Visitation will be Sunday from 2:00 to 4:00pm and 6:00 to 8:00pm at Ansberg-West Funeral Home. Services will be held 11:00am Monday at Christ Presbyterian Church. Interment at Ottawa Hills Memorial Park.? The family requests remembrances to be directed to The University of Toledo Judith Herb College of Education Elise Scott Connin scholarship fund.? Online condolences may be left at www.ansberg-west.com

The family of Elise Scott Connin created this Life Tributes page to make it easy to share your memories.

Elise Scott Connin passed away after a brief illness on Wednesday,...