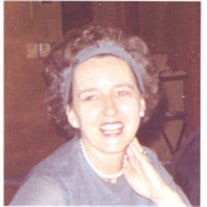 Elizabeth, known as Biz most of her adult life, passed away August 29, 2012 at the Goerlich Center in Sylvania. She was born in Minnesota to John and Mary Schruth. She is predeceased by her parents, and brother, John and Peter Schruth. She is survived by twin sister Jean Diehl of Minnesota. Biz met her husband Charles the summer of 1941 while they were both working at Yellowstone National Park. They got to know each other while playing tennis, bridge and dancing to the "Big Band" music so popular then, interests they would continue to share throughout their married life. Thus began a two year, long distance courtship culminating in marriage the day after Chuck's graduation from Purdue University in 1943. They were married in the Chapel on campus. They would move several times in the coming years, going from Louisiana to Oklahoma, on to Washington DC, back to Oklahoma, then to Toledo and Cleveland as Chuck's career progressed. They returned to Toledo about 6 years ago. They were married 63 years when Chuck passed away in 2007. Biz was primarily a homemaker, she was a wonderful wife, mother, and grandmother, very supportive and caring. She would always put her family's needs before her own. Biz loved a good conversation whether it be with bridge partners, her children's friends or the staff at one of their favorite restaurants. Because of her wonderful sense of humor, many were left laughing while talking with her. Left behind to deeply miss her are children, Dr. William (Kristen) Lynch of Pepper Pike, OH, Nancy Elizabeth Lynch-Kolpien of Toledo, OH, and Peter (Lauren) Lynch of Williamsburg, Massachusetts; grandchildren, include Kelly (David) Hicks, Kristin (Dave) Pruitt, Kevin (Meg) Lynch, Christopher (Bethany) Lynch, William Patrick, and Kathryn Elisabeth Lynch, Jennifer Elizabeth Kolpien, Sheridan (Kendell) Burke, Reid, Ben, and Dylan Lynch. She is also survived by great-grandchildren, Brian and Connor Hicks, Matthew, Mary Cate, Brendan and Anna Pruitt, Caroline and Sarah Elizabeth Lynch, Luke, Hannah Jane and Max Lynch, Carter, Chelsea, Callie Elizabeth and Camden Burke. Mom and dad always had a dog while we were growing up, a series of adorable Boston Terriers, all named "Aggie". Their last dog was a pug-Missy and she survives. Arrangements are through Ansberg-West Funeral Home on Sylvania Ave. Visitation will be Saturday, September 1, 2012, 9:30-11:30 a.m. followed by Mass at Christ the King at 12:00. Interment to follow at Toledo Memorial Park. We would like to thank the staff and caregivers at West Park Place and the Goerlich Center for their compassionate care and concern these last years. Please consider donation to the Hydrocephalus Foundation at www.hydrocephalus.org. We'll miss you mom, give our love to dad.

Elizabeth, known as Biz most of her adult life, passed away August 29, 2012 at the Goerlich Center in Sylvania. She was born in Minnesota to John and Mary Schruth. She is predeceased by her parents, and brother, John and Peter Schruth. She is... View Obituary & Service Information

The family of Elizabeth Ann Lynch created this Life Tributes page to make it easy to share your memories.

Elizabeth, known as Biz most of her adult life, passed away August...