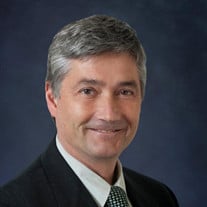 Dr. Erich Roderick Pontasch passed away at St. Anne’s Mercy Hospital on December 16th, 2019, surrounded by his friends and family. He was born in Toledo, Ohio on April 7th, 1957. He was a graduate of St. John’s Jesuit High School, The University of Toledo, and the Medical College of Ohio. He completed his residency in Emergency Medicine at St. Vincent’s Mercy Medical Center. Erich went on to have an astonishing 35-year medical career in the city that trained him-- working at Riverside Hospital and St. Anne’s Mercy Hospital. During this time, he was named a Summit Achiever by the Toledo Blade in 1987, worked as an on-board physician for Life Flight from 1996-2002, was named Preceptor of the Year by LECOM in 1999, and elected Chief of Staff of St. Anne’s Mercy Hospital from 2009-2012, the facility from which he would retire in 2019. As a clinician, he was a healer with extraordinary clinical aptitude, acted as a mentor for residents, students, and staff, and was a listener to those who needed it most. He was beloved by his coworkers, his patients, and all those who learned under his tutelage. Outside of the hospital, his enthusiasm for adventure would permeate throughout all aspects of his life. He spent part of his youth visiting his family in Austria (the birthplace of his father), a portion of his 20’s backpacking through Europe, and went on to explore New Zealand, the Caribbean, the Rocky Mountains, and many more places with his family and friends. He played hockey for St. John’s and The University of Toledo, where he earned the nickname “E-Man” and was elected team captain. In medical school, he would regularly drive down to Florida after exams, where he would scuba dive, free-dive for lobsters, and visit family and friends. He was an avid skier, dog lover, Red Wings fan, gardener, lover of film and television, and an extraordinary father who would always spend time teaching, listening, and adventuring. He was known to support the endeavours of those around him, imparting a love of life, study, and empathy. He will be greatly missed by his two sons, Scott and Gregory, his ex-wife Susan, his son-in-law Baldvin, his mother Dolores, and siblings Kurt, Martin, and Elisabeth. He was preceded in death by his father, Walter, and his best friends: Morgan, Tango, and Wilco. His funeral visitation will be Sunday, December 22nd from 11am-4pm at Ansberg-West Funeral Home, 3000 West Sylvania Avenue, Toledo, Ohio.

Dr. Erich Roderick Pontasch passed away at St. Anne&#8217;s Mercy Hospital on December 16th, 2019, surrounded by his friends and family. He was born in Toledo, Ohio on April 7th, 1957. He was a graduate of St. John&#8217;s Jesuit High School,... View Obituary & Service Information

The family of Dr. Erich R. Pontasch created this Life Tributes page to make it easy to share your memories.