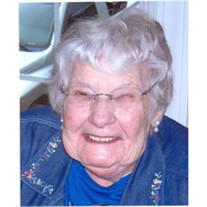 Erma F. Emery 90, went to be with the Lord on the Fourth of July 2008 surrounded by her beloved family after a brief illness. She had previously lived with her daughter in Lambertville for 6 years. She was born in Toledo on June 9, 1918 to Walter and Alma (Feiselman) Bladell. She was a graduate of DeVilbiss High School class of 1937 which was the first year that students began in 7th grade and continued through high school. She then attended the Berkley School of Beauty Culture graduating in 1938. She worked in the White Tower Restaurant while she was in beauty school and then at Wilma's Beauty Salon and the Toledo Hospital Records Office. She retired in 1981 from the former AP Parts after 30 years where she was employed as a key punch and telex operator. After retiring Erma enjoyed working in the voting booths for several years as well as traveling with and attending Calvary Bible Chapel with her husband John. Since moving to Lambertville, Erma has faithfully attended Bedford Christian Community Church where she will be greatly missed. Her love for the Lord was great and she is with Him now. Erma is survived by her one and only daughter, Nancy (Rich) Sinay of Lambertville, 5 grandchildren and 9 great-grandchildren, Tony (Renee) Sinay of Ann Arbor MI, and their children, Tony II, Ally, and Aaron; Joe (Tricia) Sinay of Blissfield MI, and their children Andrew, Joe Jr., Zack and John; Mary (John) Mazur of Petersburg MI.and their children, Noah and Caleb; John (Fianc? Cheryl Clark) Sinay Jr. of Lambertville MI, and Michael Sinay; special puppy Molly; nieces, Bonnie (Chuck) Hoagland and Lois (Don) Carrick.. She loved and enjoyed them all. Her family wishes to extend special thanks to Dr. Donald Vogel for the kind and loving care that she received for many years. Friends are invited to visit from 2:00-8:00PM Monday July 7, 2008 or after 10:00AM Tuesday in the Ansberg-West Funeral Home, 3000 Sylvania Ave. where funeral services will follow beginning at 11:00AM. Rev. Nate Elarton Officiant. Interment in Toledo Memorial Park Cemetery.

Erma F. Emery 90, went to be with the Lord on the Fourth of July 2008 surrounded by her beloved family after a brief illness. She had previously lived with her daughter in Lambertville for 6 years. She was born in Toledo on June 9, 1918 to Walter... View Obituary & Service Information

The family of Erma F. Emery created this Life Tributes page to make it easy to share your memories.