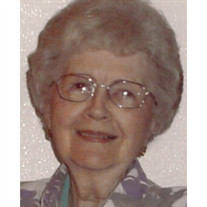 Evelyn Louise Olson, 91, passed away May 7, 2016 at the Lutheran Village at Wolf Creek. She was born January 8, 1925 to Andrew and Laveria Olson in Viroqua, Wisconsin. She worked at Towner’s and Felix’s as a salesperson for 38 years before becoming the receptionist at Bethel House. She moved with her family to Kenosha, WI in 1980 and eventually to Toledo in 1999. She was a member of the Lionettes, VFW ladies auxiliary, Good Shepherd Lutheran Church in Viroqua, where she sang in the choir. Her hobbies included singing, sewing, Norwegian stitching, crochet, ceramics, golfing and fishing. She is survived by her son in law, Raymond Swangstu; grandchildren, Todd (Carrie) Swangstu, Angie (Timothy) Swangstu-Hyatt; great grandchildren, Tristan, Kaija, Julian and Stuart. She was preceded in death by her husband, Julian “Joe” Olson; daughter, JoAnn Swangstu and brother, Raymond. Special thanks to the staff at Lutheran Village at Wolf Creek and ProMedica Hospice for the loving care. Friends are invited to visit from 5:00pm to 7:00pm Friday at Ansberg-West Funeral Home, 3000 Sylvania Avenue, where a memorial service will commence at 7:00pm. Condolences for Evelyn’s family may be expressed online at www.ansberg-west.com

The family of Evelyn Louise Olson created this Life Tributes page to make it easy to share your memories.