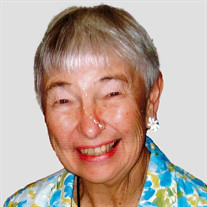 Evelyn Jane Turner White, 91, passed away on April 15, 2021, at Ohio Living Swan Creek. She was born on December 13, 1929 in Pittsburgh Pennsylvania to Madelyn Lowe and Arthur Arnold Turner. Evelyn was baptized by her grandfather Bishop Titus Lowe. She was raised in Metuchen New Jersey and graduated from Metuchen High School where she was valedictorian. She attended Ohio Wesleyan University because her great-great grandfather, a Methodist circuit rider, Michael Purkhiser, helped found it. Her grandfather, Methodist Bishop Titus Lowe graduated from Ohio Wesleyan as his wife, Anna Bessie Creed and several aunts. She completed her Bachelor of Arts in psychology in 1951. She was a member of Pi Beta Phi social sorority and Psi Chi an honorary society for those majoring in psychology. She met her husband Bill, at OWU and they were married on June 23, 1951. Once her three children were alder, she began a career with the United States Census Bureau. Evelyn conducted monthly and special surveys. During the 2000 decennial census, she was a supervisor for eight Ohio Counties and served as a regional technician as a liaison between the Detroit, Toledo, and Lima district offices. In addition to her employment, Evelyn spent countless hours serving others. She was an active member of Epworth United Methodist Church for 55 years, serving as chairperson of administrative council, member of the board of trustees, pastor parish relations, and nominations and personnel. Evelyn and Bill met most of their lifelong friends through Epworth. She continued giving back to Ohio Wesleyan as a two-term member of the Alumni Association Board of Directors, and the Monett Club and Pi Beta Phi. Evelyn was honored with the Order of the Golden Key for fifty vears of loyaltv to Ohio Wesleyan. In addition to these activities, she was an active member of DAR where she served as treasurer and PEO where Evelyn served as president, treasurer and recording secretary. Evelyn enjoyed traveling; first with her family, camping in many national parks and then with Bill visiting more than 50 countries. She was an avid reader, bridge player, and worked on genealogy traveling to many of her ancestor's homelands. Evelyn is survived by her three children David (Betsy), Carol (Hugh) Gaylord, and Bill (Maria) White and five grandchildren Andrew, Ashley, Kathryn, Scott White, and Laura (Scott) Seaman and her great grandson, Zander Seaman. She was preceded in death by her husband of 62 years, Bill. A memorial service will be held at Epworth United Methodist Church May 8, 2021 at 1:00 pm, with visitation beginning at12:00 pm. In lieu of flowers, please consider donations to Epworth United Methodist Church or Ohio Wesleyan University.

Evelyn Jane Turner White, 91, passed away on April 15, 2021, at Ohio Living Swan Creek. She was born on December 13, 1929 in Pittsburgh Pennsylvania to Madelyn Lowe and Arthur Arnold Turner. Evelyn was baptized by her grandfather Bishop Titus... View Obituary & Service Information

The family of Evelyn Jane Turner White created this Life Tributes page to make it easy to share your memories.