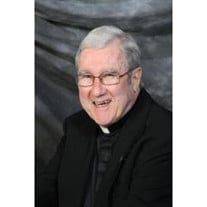 Father Arthur A. Badger, 89, a priest of the Toledo Diocese for 63 years, died on March 4, 2016 at Ursuline Care Center, Toledo, Ohio. He was born in Toledo on September 9, 1926, the son of A. Albert Badger and Rose C. Byrne. His parents were charter members of St. Vincent de Paul Parish where he attended school. Father Badger graduated from Central Catholic High School in 1944, received his BA degree from St. Meinrad College, and his M.Div. from Mt. St. Mary of the West Seminary in Cincinnati. He was ordained to the Priesthood in Rosary Cathedral by Bishop George J. Rehring on May 30, 1953. His further educational pursuits included the Atheneum of Ohio, Notre Dame University, University of Windsor, and the University of Toledo. His assignments after ordination were: Norwalk St. Paul, where he was Associate Pastor and High School Principal; Sylvania St. Joseph Parish and Lourdes College where he taught Theology; Holy Spirit Prep Seminary in Toledo where he was Vice Rector/Co-founder, Dean of Students and English Instructor; served as Pastor at Vermilion St. Mary Parish, Delphos St. John Parish, Toledo St. Catherine Parish, and Gibsonburg St. Michael Parish. During his years at Holy Spirit Seminary, he also did part time ministry at Sandusky Holy Angels, New Washington St. Bernard, Toledo Sacred Heart and Toledo St. Theresa Parishes. Since Father Art's retirement in 1994, he returned to live in Toledo, his home town. He continued to minister regularly throughout the area of Northwest Ohio and Southeast Michigan. He was most happy in his priestly ministry to people of all ages, of various religious affiliations, and especially reaching out to the needy. His attitude was, "I am still blessed with fairly good health and want to use my gifts from God to continue to teach others about how much God loves them, how gifted they are ... and to be His representative as best I can. " Some other responsibilities he felt privileged to assume over the years were: Diocesan Consultor, Dean of Northwest Toledo Deanery, Priests' Council, Diocesan Moderator of Council of Catholic Women, Member of Pastoral Alliance, K of C Chaplain, Missions Representative for Office of Global Concerns, part time Chaplain at St. Charles and Medical College Hospitals. Besides Father Badger's work in the Church of the Diocese of Toledo, he was also associated with the Center for Human Development in Washington, D.C. for almost twenty years on a part time basis. He worked with the founder, Father Vincent Dwyer, Father Daniel Zak, and others in retreat work for clergy and religious throughout the United States, Canada, England, Scotland, and Australia. He enjoyed life and people as well as time to relax. His recreation time involved golf, swimming, yard work, and travel. He also loved music and the theater and after his retirement took piano lessons and joined the Seaway Commanders Barbershop singer. Over the years, he and Msgr. Cleo Schmenk, entertained many family members and friends at their farm, Hiawatha Hills, in Michigan's Upper Peninsula. Father Arthur Badger was preceded in death by his parents, Rose and Albert, his step- mother Alma, his brother James, his sister Rosemary Sulier, his nieces Kimberly Badger, Anita Sulier Fueling and his nephews Raymond Sulier, James and Douglas Badger. Surviving are his sister-in-law Dolores Badger of Temperance, MI; his friend and home partner who cared for him in his retirement years, Elaine Bonifas-Ladd of Toledo,OH; all his priest friends and former parishioners. He is also survived by his nieces, nephews, and other friends: Patricia Sulier of Kalamazoo, MI; Edward "Chip" Sulier (Sandra) of Temperance, MI; Dennis J. Badger (Sue) of Canal Fulton, OH; Donald A. (Pam) Sulier of Rock Hill, S.C.; John A. (Gayla) Badger of Perrysburg OH; Cheryl A. Sulier of Vero Beach, FL; Richard Sulier (Linda) of Erie, MI; Kathy Sontag (Kevin) of Temperance, MI; ; Michael A. Badger of Toledo, OH; Robert J. (Jean) Sulier of LaMesa, CA; Kelly Bausman, Dexter, MI; Tracey Ladd, (Jim) Motta of Warren, MI; Matthew Ladd of Manistee, MI; Angela (Jeff) Frensley, Harrietta, MI; plus great nieces, nephews, a great, great niece and great, great nephews . Reception of the body with Vespers will be on Monday, March 7 at 4:00 pm, Christ the King Catholic Church with visitation until 8:00 pm Monday. Visitation will continue on Tuesday March 8 beginning at 9:00 am to 11:00 am. The Mass of the Resurrection will be celebrated at 11:00 am in the church with the Most Rev. Daniel E. Thomas officiating. Interment will follow in the Priests’ Section of Calvary Cemetery. Jokingly, a few years ago, Father Art suggested any memorials might go to the Humane Society for the care of ailing badgers. Seriously, any contributions may be directed to the Priests' Retirement Fund of the Toledo Diocese or The Ursuline Center, Toledo, OH. Father Badger’s family and friends wish to express their sincere thanks to the Ursuline Sisters and the Center employees for the excellent care he received while he was a resident there. They are also grateful for the excellent care Hospice of Northwest Ohio provided him. Arrangements entrusted the Ansberg-West Funeral Directors, (419) 472-7633. Online condolences may be sent to the family at www.ansberg-west.com

Father Arthur A. Badger, 89, a priest of the Toledo Diocese for 63 years, died on March 4, 2016 at Ursuline Care Center, Toledo, Ohio. He was born in Toledo on September 9, 1926, the son of A. Albert Badger and Rose C. Byrne. His parents were... View Obituary & Service Information

The family of Father Arthur A. Badger created this Life Tributes page to make it easy to share your memories.

Father Arthur A. Badger, 89, a priest of the Toledo Diocese for...