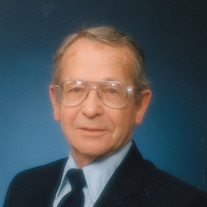 Frank B. “Bernie” Dent, passed away, April 5, 2018, at the age of 85. He was born Sept 4, 1932 in Toledo, Ohio to Frank & Clara Dent. A graduate of Whitmer High School in 1950, Bernie volunteered to serve in the Army during the Korean War (1952-1954) and earned his carpenter certification with the 6th Armored Division, Fort Leonard Wood, Missouri. He received his Honorable Discharge with a NDSM and GCM. Bernie was a master carpenter and builder of fine homes in the Toledo area for most of his life. He was known for his excellent skills and workmanship. He worked for many years as a construction superintendent for residential and commercial projects in Toledo and out of state. He was a past member of #1138 Carpenters Union. He retired in 1998. Bernie was a 32nd Degree Mason and was active in the Masonic Boaz Lodge A & FM which later merged with Robinson-Locke Lodge #659. Also, a member of Zenobia Shrine and served in the Zenobia Shrine band as a clarinet player. He enjoyed his daily visits with Special friends at Café Donuts. He was preceded in death by his parents, siblings Doris Culler, Neva Janney, Gladys Lang, Iris French, Betty Shook & Orin Dent. He is survived by his children, Shelley (Steve) Wynn, Michael (Sharon) Pietras, Terry (Pamela) Pietras, 12 grandchildren and 11 great grandchildren. Friends are invited to visit on Tuesday, April 10, 2018, from 2-8 p.m., at the Ansberg-West Funeral Home, 3000 W Sylvania Ave, Toledo, OH, (between Secor and Douglas Roads), where Masonic services will be held 7 p.m. Christian funeral services will be held on Wednesday, April 11, 2018, , at 10 a.m. at the funeral home. Burial follow at Whiteford Union Cemetery, Sterns Road, where Lambertville VFW will conduct Military Honors. In lieu of flowers, please consider a donation to Ohio Living Home Health and Hospice, 1730 South Reynolds Road, Toledo, OH, 43614.

The family of Frank B. "Bernie" Dent created this Life Tributes page to make it easy to share your memories.