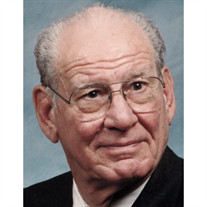 George Dimit, 91, passed away on Sunday, December 18, 2016, at Ebeid Hospice. Born to Christ and Mary (Slachta) Dimitrakopoulos on January 23, 1925 in Chicago, IL. He was a wonderful husband, father, and “Papou” to his grandchildren. He will always be remembered for his love and devotion to his late wife of 47 years, Helen Dimit, his family, and his friends. Growing up during the Depression, George learned about the importance of hard work, responsibility, and being part of a community. He gave his family love and guidance and was always supportive. At age 17, he met Helen at a church dance and they married in 1953. They moved to five states during their marriage due to George’s career in the automotive industry, finally settling in the Toledo area for over 40 years. He was President of Mather Metals when he retired. He enlisted in the Army Air Corps where he was a pilot and aviation instructor, reaching the rank of Lieutenant by the end of WWII. He also played football for the Army Air Corps southeastern team, where he was selected to play in the All-Army Air Corps national football play-off game. After the war, he received a football scholarship from the University of Illinois, where he played in the 1947 Rose Bowl. George graduated with a degree in Industrial Engineering. He was a member of the Theta Xi Fraternity. He was proud of his Greek heritage. He was inducted in the Greek-American Athletic Hall of Fame as well the NHIBT Hall of Fame. During the nine years George played basketball for the Ypsilanti team in Chicago, they won 12 of 14 national Greek-American NHIBT and AHEPA titles. In his later years, he won a national Greek-American AHEPA Senior golf title. He loved his golf and was thrilled that he hit a hole in one and grateful that he was able to play golf into his late 80s. George was an active volunteer donating his time and expertise to the community and to the church, including serving on the Board of Directors of the Holy Trinity Greek Orthodox Cathedral and as President of AHEPA. He also was a member of the Elks Club, the Royal Order of Jesters (25-yrs) and a long-time member of the Sylvania Country Club. Surviving to cherish his memory are his loving family: daughters Mary Dimit (Mark Sauer) of Palo Alto, CA; Stacia Dimit (Jeff Plahs) of Toledo, OH and Georgette Dimit of Toledo, OH; sons Chris Dimit (Carol) of Tucson, AZ; Greg Dimit (Kelley-Anne Peck) of Northville, MI; grandchildren: Colleen and Grant Dimit Sauer, Elizabeth Dimit, and Nicholas, Christian, Gabriel, and Joshua Peck-Dimit. George was preceded in death by his wife, Helen, his father, mother and brother, Harry Dimitrakopoulos. Visitation will be held from 3 to 8 p.m. on Tuesday, December 20, 2016, a Trisagion Service will be at 7 p.m. at the Ansberg-West Funeral Home, 3000 W. Sylvania Ave., Toledo (419-472-7633). A Funeral service will be at 11 a.m. on Wednesday, December 21, 2016 at the Holy Trinity Greek Orthodox Cathedral. Interment in Evergreen Cemetery in Chicago, IL. In lieu of flowers, memorial gifts can be made to the Holy Trinity Greek Orthodox Cathedral at 740 N. Superior St., Toledo, OH 43604 or to Ebeid Hospice at 5340 Harroun Rd., Sylvania, OH 43560. Condolences for George’s family may be expressed online at www.ansberg-west.com

The family of George Dimit created this Life Tributes page to make it easy to share your memories.