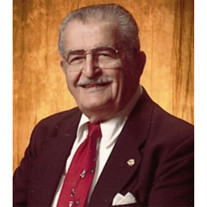 George Manol passed away on June 1, 2017 at his residence in Holland, OH. He was born in Toledo on March 8, 1926 to Sam and Efthemia Manol. In his youth, George attended Woodard High School where he played football for the Polar Bears. After leaving Woodward, he worked for New York Central Railroad for 19 years as a ticket agent. He then went into the hospitality business, first as a bartender at Heather Downs Country Club, before taking on a series of restaurant management duties that included Owens Illinois’ “Onized Club”, Byrnwyck (now Brandywine) Country Club, and Evdemon’s Someplace Else. He then purchased what was at the time a private club in downtown Toledo, which he turned into the very popular George’s City Club, where he served as owner, operator, and host for over 26 years before selling the restaurant and retiring. He was a member of Holy Trinity Greek Orthodox Church and past President of the AHEPA. In his free time, George was an avid golfer. He also loved to travel. He was preceded in death by his father Sam Manol, mother, Efthemia (Manol) Pappas, stepfather Thomas Pappas, brother Nick, sister Frieda (Sevastakis), son Thomas, and nephew Sam. Surviving are his ex-wife and long-time business partner, Jeanette, daughter Lisa, son Paul (Kathy) Manol, granddaughter Courtney Williams (George), grandson Joseph Manol (Christina), 5 great-grandchildren (Brady, Alexandria, Olivia, Charlotte, and Georgie), his niece, Aretta Sevastakis, and 2 nephews, Christopher and Nicholas Sevastakis. Friends and relatives are invited to call Sunday, June 11 from 3:00-8:00 p.m. at the Ansberg-West Funeral Home, 3000 Sylvania Avenue, where Trisagion prayers will be held at 7:00 p.m., followed by AHEPA services. Funeral services will be conducted Monday, June 12 at Holy Trinity Greek Orthodox Cathedral, 740 Superior St., at 10:00 a.m., Father Nicholas Kotsis presiding. Entombment will follow at Toledo Memorial Park. Memorial contributions can be made to Holy Trinity Greek Orthodox Church or to a charity of the donor's choice in memory of George. The family wishes to extend a special thank you to the staff of Lutheran Village Wolf Creek and to Promedica Hospice for their compassionate and tender care of our Dad, Grampa, and Great Grampa.

George Manol passed away on June 1, 2017 at his residence in Holland, OH. He was born in Toledo on March 8, 1926 to Sam and Efthemia Manol. In his youth, George attended Woodard High School where he played football for the Polar Bears. After... View Obituary & Service Information

The family of George S Manol created this Life Tributes page to make it easy to share your memories.