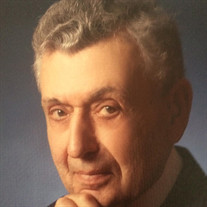 George John Mulopulos of Toledo, Ohio passed away peacefully at his home on February 12, 2020 surrounded by family and friends. He was 89 years old. George was born in Toledo, Ohio on May 15, 1930 to John and Theodora (Dorothy) Mulopulos. He attended the University of Toledo, but chose to interrupt his education to enlist in the United States Airforce during the Korean War, where he served his country proudly as a Signal Corps Staff Sergeant from 1951-1955. His duty took him to French Morocco, North Africa before returning to continue his education in electrical engineering at Owens Technical College, where he earned an Associate degree. George was well known in the community as the longtime owner and operator of the State Café in downtown Toledo, located where the Toledo Convention Center now stands, and is remembered for having some of the best chili in the state. In 1960 he married his beloved life partner Anastasia (Ann) Savvas, with whom for the past 59 years he was inseparable. She was the center of his world. George was a good, honest, and hardworking man who loved his family and his church. A steady pillar of the Holy Trinity community, where he served as a Parish Council member and was a member of the Young at Heart and Sons of Pericles, he was always ready to help anyone in need. His quiet demeanor never sought the spotlight, but with tools in hand, he could tackle any problem small or large. A dedicated husband, father, and grandfather, he cherished the time he spent with his family travelling and celebrating life’s precious moments. He is survived by his loving wife Ann, his son Peter, his daughter Dorrie (Papademetriou), his brother Sam, and his beloved grandsons George and Roman Papademetriou. He is preceded in death by his parents and sister Dena Anastos. Visitation will be held Friday, February 14, 2020 from 3:00 - 8:00 pm at Ansberg-West Funeral Home, with a Trisagion at 7:00 pm. Funeral services will be held at 11:00 am on Saturday at Holy Trinity Greek Orthodox Cathedral. Contributions in his memory may be made to Holy Trinity Greek Orthodox Cathedral.

George John Mulopulos of Toledo, Ohio passed away peacefully at his home on February 12, 2020 surrounded by family and friends. He was 89 years old. George was born in Toledo, Ohio on May 15, 1930 to John and Theodora (Dorothy) Mulopulos.... View Obituary & Service Information

The family of George John Mulopulos created this Life Tributes page to make it easy to share your memories.