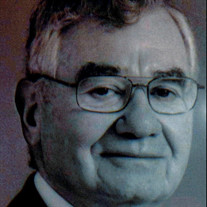 Dr. George J. Murnen, Ph.D. in Civil Engineering, age 91, passed away Sunday, May 30, 2021. He was born January 23, 1930, in Greenville, SC and was the son of George and Edith Murnen. George was a 1948 graduate of Central Catholic High School and spent one year at the University of Notre Dame. He was drafted into the Army and served honorably for two years during the Korean War. George received his Bachelors in Civil Engineering from the University of Toledo. George earned his Masters of Civil Engineering from the University of Illinois and his Ph.D. in Civil Engineering from the University of Notre Dame. He met his wife, Patricia Kelly at a C.Y.O. Dance and they were married on August 24, 1957. George taught Civil Engineering at the University of Toledo for more than 50 years. Students that couldn’t go home for the holidays were invited over for dinner and he would drive over to the library and pick them up. He worked on many Civil Engineering projects around the country, including the East Huntington Bridge on the Ohio/West Virginia line, which he worked with his son Brian. George was a lifelong, devout , Irish Catholic member of Gesu Church. He was also a member of the Ottawa Park Board, Knights of Columbus, University of Toledo Retirees Association and the Toledo Diocese Building Commission. George was an avid fan of Central Catholic High School, University of Toledo, University of Notre Dame, Green Bay Packers, which he had part ownership, and the Cincinnati Reds. He was a lover of red wine, especially Cabernet, and a cold Sam Adams Beer. He enjoyed running in his younger days, history, and black, hot coffee among many other foods, drinks and spices. He had several titles over the years; Son, Brother, Husband, Father, Professor, Mentor, Ambulance driver, as much as he was taking his sons to the hospital for stitches, but the title he loved the most was Grandpa or B·Pa or Paw Paw. He enjoyed teaching his grandchildren how to play poker with the old rubber poker chips “Jacks or better to open” and how to pour the perfect glass of wine, much to their parent's dismay. He enjoyed traveling around the United States, Europe, and Asia, but his favorite place to travel was Raleigh, NC to visit his grandchildren that lived down there. Left to cherish his memory is his wife, Patricia; sons, George Murnen, Michael (Marie) Murnen and Kevin (Kathy) Murnen; daughter-in-law Ginny Murnen; grandchildren, Shawn, Maura (Curtis), Erin, Matthew, Heather, Kayla (Jeffrey), Alexis and Jayce; and one great-grandchild on the way; brother, Tim Murnen and sister, Ann Jones. He was preceded in death by his parents; brother Bill Murnen; sister, Sally Cupp and son, Brian Murnen. Family and friends are invited to visit on Thursday, from 2-8 p.m., at the Ansberg-West Funeral Home, 3000 Sylvania Avenue, (between Secor and Douglas Roads), where the rosary will be recited at 6:30 p.m. The funeral mass will be celebrated on Friday, at 10 a.m., at Gesu Church, 2049 Parkside Boulevard. Interment will follow at Resurrection. Contributions in memory of George may be made to the George J. and Patricia Murnen Scholarship Fund at Central Catholic High School.

Dr. George J. Murnen, Ph.D. in Civil Engineering, age 91, passed away Sunday, May 30, 2021. He was born January 23, 1930, in Greenville, SC and was the son of George and Edith Murnen. George was a 1948 graduate of Central Catholic High School... View Obituary & Service Information

The family of George J. Murnen Ph.D. created this Life Tributes page to make it easy to share your memories.