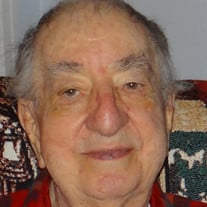 On November 19, 2019, GEORGE NICHOLAS PANOS died at St. Anne's Hospital in Toledo, Ohio. He was 90 years old. Who was this man? He was a son, a brother, a husband, a father, a grandfather, a great-grandfather, and a friend. And in every one of these life experiences, GEORGE was passionately devoted and enthusiastically engaged. He dearly loved God, his family, his friends, and the United States of America. The son of Greek immigrants from the island of Tenedos, GEORGE grew up in Toledo, Ohio. His birth father, William Arvan, died when GEORGE was 5 years old and his mother, Despina, died in childbirth when GEORGE was 7 years old. His stepfather, Nick Panos, lovingly cared for GEORGE and his brothers Ted and Billy and sister Christine. Born during the Great Depression of 1929, GEORGE and his siblings were very poor, yet GEORGE rose above the poverty level by starting to work at a young age delivering newspapers and working at a hardware store, and doing whatever it took to survive. The Boy's Club of Toledo, Ohio was GEORGE'S home away from home and a place that would forever change his direction in life. His lifelong appreciation for the Boy's Club never ceased. GEORGE graduated from Toledo 's Macomber High School in 1946. While at Macomber, GEORGE lettered in basketball, baseball, and football. His love of sports continued into the military where he boxed, played football and rode bucking broncos. In the Army/Air Force, GEORGE participated in the Berlin Airlift after WWII ended. After three years in military service, GEORGE married Nina Wittich (the love of his life) and they welcomed into the world, three beautiful daughters. GEORGE worked hard to support his family and provide a wonderful life filled with the adventures of family vacations that included camping and fishing in beautiful Michigan, experiencing the thrill of the majestic Rocky Mountains in Colorado, the Tetons in Wyoming, the wonder of the newly-opened Disneyland in California, and the sunny beaches of Florida. GEORGE was a loyal union worker at Ford Motor Company where he worked in Quality Control and was recognized for numerous beneficial suggestions to the company. In 1980, GEORGE wrote a letter to the president of Ford Motor Company detailing the need for quality. That letter led to Ford's famous slogan: "Quality is Job 1." GEORGE continued his writing talents throughout his life with articles published in magazines, internet e-mail club, and his beloved Facebook. His hobbies included golfing, hunting, fishing, photography, gardening, (he grew beautiful prize-winning roses), cooking, and music. Whatever he did or wherever he went, GEORGE did it with enthusiasm and joy. And most importantly, GEORGE did it his way!!! Preceding GEORGE in death was his daughter, Kristina Becker. Kristina brought color and delight to GEORGE'S life through her exquisite artwork, gentle kindness, and true beauty. We who remain... daughters, Tina Williams and Shelley Ferner; son-in-law, George Ferner; grandsons, Andy Ferner, Nikolas Becker and Casey Becker; great-grandchildren, Kalib, Zak, and Ruby; brother Bill Panos and family; and best friend Pearl Bartle will forever treasure the privilege of loving and being loved by a perfectly imperfect and good man, GEORGE NICHOLAS PANOS. Family and friends are invited to visit on Monday from 11 a.m. until the funeral service at 1 p.m., at the Ansberg-West Funeral Home, 3000 Sylvania Avenue, (between Secor and Douglas Roads). Interment will follow at Toledo Memorial Park, where Lambertville VFW Post 9656, will conduct military honors. Memorial contributions may be made to Flag City Honor Flight, P.O. Box 885, Findlay, OH 45840 or Holy Trinity Greek Orthodox Cathedral, 740 North Superior Street, Toledo, OH 43604. Online condolences may be sent to George’s family at

On November 19, 2019, GEORGE NICHOLAS PANOS died at St. Anne's Hospital in Toledo, Ohio. He was 90 years old. Who was this man? He was a son, a brother, a husband, a father, a grandfather, a great-grandfather, and a friend. And in every... View Obituary & Service Information

The family of George N. Panos created this Life Tributes page to make it easy to share your memories.