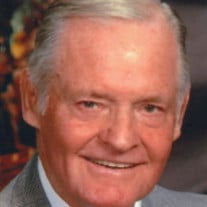 George K. Ritter, a decorated World War II paratrooper whose love of East Toledo was exceeded only by his love of family, passed away March 15, 2018 at ProMedica Ebeid Hospice. He was 93. Mr. Ritter served with distinction in the Army during the war as a member of the 11th Airborne Division in the Pacific, enlisting in February 1943. He made 33 jumps as a paratrooper, winning citations that included the Philippine liberation ribbon with two bronze service stars, the American Theater ribbon with bronze arrowhead, and the World War II Victory Medal. He also was honored for his service when he traveled to Washington D.C. a few years ago on an Honor Flight with other World War II veterans. Eight months after his discharge in 1946, he married the love of his life, Jane Goebel. Mr. Ritter went to work as a laborer for Libbey-Owens-Ford, later becoming a sales representative for Maumee Valley Distributing. He eventually took a position with the City of Toledo and became supervisor of ditch maintenance, retiring after 12 years of public employment. George was born at the old East Toledo Hospital and grew up on the east side of the river. He never lost his love for East Toledo and its heritage. "Once an East Sider, always an East Sider," he liked to say. Traveling was another passion for George. He and Jane visited all 50 states over the course of their marriage, often traveling with their children and grandchildren. The last state on their quest was Alaska, just five years ago. They enjoyed including their grandchildren on annual vacations to Florida. They also vacationed for 11 years in a Grand Haven, Mich., cottage appropriately named "Memories." George's love of young people was also manifested in his involvement with the Boy Scouts for many years. He served for three years as Scoutmaster for Troop 60 at Navarre School. His enthusiasm for life extended to sports. He loved softball and baseball. He played fast-pitch softball for many years and continued with slow-pitch softball into his early 80s. He also enjoyed watching his son Bill play senior baseball in the Roy Hobbs league at Skeldon Stadium in Maumee. Two years ago George was selected as an East Toledo Neighborhood House Distinguished Alumnus. He served on the East Toledo Historical Society and Friends of Navarre Park boards for many years. His love of history included membership in the Toledo Civil War Roundtable for over 15 years. George had a knack for making friends. The last stranger George met became his newest best friend. He was a member of the Most Blessed Sacrament Church for over 50 years, serving his faith as a member of the Holy Name Society and working as an usher and Eucharistic Minister. He also offered communion to parish shut-ins. George is survived by his wife, Jane, his daughter, Susan Fischbach, son Bill (Margi), six grandchildren, 11 great-grandchildren, a niece, Judy (Dennis) Hill, and cousin Ruth Long. A sister, Gloria Schwen (Bob), preceded George in death. Typical of George's generous nature and his service to others, he made a decision many years ago to donate his body to the University of Toledo Medical Center upon his passing. A celebration of George's life will be held at The Most Blessed Sacrament Church Saturday, March 17. The gathering will begin at 11:30 a.m. followed by a Celebration of Mass at noon. The family suggests that any memorials be to the East Toledo Family Center or Ebeid Hospice.

George K. Ritter, a decorated World War II paratrooper whose love of East Toledo was exceeded only by his love of family, passed away March 15, 2018 at ProMedica Ebeid Hospice. He was 93. Mr. Ritter served with distinction in the Army... View Obituary & Service Information

The family of George K. Ritter created this Life Tributes page to make it easy to share your memories.