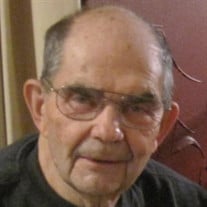 Gerald “Jerry” Walter Westphal passed away peacefully in the presence of family on November 2, 2020. Jerry was born October 31, 1933 to Walter and Emma (Winzeler) Westphal at Mercy Hospital in Toledo. He graduated from Macomber Vocational HS in 1951. He met the love of his life and future wife at a graduation party. Jerry married Jean Marie McIntosh four years later on April 16, 1955. Jerry served eight years in the Naval Reserve, worked for 29 years at Babcock Dairy and then twelve years at Johnson Controls Battery. During these years, Jerry and Jean raised four children and family activities were of utmost importance. Whether summer vacations in a travel trailer he designed and built, one of his favorite drives up the Maumee River or Sunday water skiing at Wamplers Lake, a family outing was always on the calendar. Jerry was very active in the lives of his grandchildren, attending innumerable sporting and school events and taking great pride in their accomplishments. Jerry was a member of The Most Blessed Sacrament Parish where he served on many committees including building and maintenance and youth board and was named a Contributor of the Year. He was active in Boy Scouts with his sons and served for a longtime as Scoutmaster for Blessed Sacrament Troop 88. Jerry also was Treasurer of the Blessed Sacrament Senior group for many years. In retirement he volunteered in the church office, worked the annual Lenten Fish Fries and delivered Meals on Wheels. Jerry and Jean loved to travel with their motorhome or on cruises. They did everything together. Jerry loved to fish on their boat and Jean pretended to love fishing for him. In later years, Jean required oxygen but they still traveled in their motorhome with a tandem bike hanging from the front bumper. After Jean passed away Jerry met a very special lady, Marilee Taylor, in June, 1999. She became his significant other for the rest of her life. Marilee and Jerry also traveled often, on cruises, to resorts and to Marilee’s family in California and Indiana. Jerry was preceded in death by his parents, a sister Mary Ann, wife Jean, son Bill, daughter Mary Ann Rosenthal and partner Marilee Taylor. He is survived by sons Bob (Mary) and Mark (Susan), grandchildren Jeremy (Jacque) Brunner, Cindi Brunner, Glenn (Kathryn) Westphal, Scott Westphal, Elaine Westphal, Nick (Karie) Westphal, Alexis (David) Skoczyn, Jason (Shellie) Lawrence and Travis Lawrence. Also ten great grandchildren and numerous in-laws, nieces and nephews. Visitation will be from 5pm-8pm on Thursday November 5, 2020 at Ansberg-West Funeral Home, 3000 Sylvania Ave, Toledo, OH 43613. Funeral Mass will begin at 11am on Friday November 6, 2020 at St. Patrick of Heatherdowns, 4201 Heatherdowns Blvd. Toledo, OH 43614. The Funeral Mass will be available to view online via livestream at toledostpats.org In lieu of Flowers, memorial contribution suggestions to Susan G. Komen, NW Ohio, Bridge Hospice or Cystic Fibrosis Foundation, NW Ohio.

Gerald &#8220;Jerry&#8221; Walter Westphal passed away peacefully in the presence of family on November 2, 2020. Jerry was born October 31, 1933 to Walter and Emma (Winzeler) Westphal at Mercy Hospital in Toledo. He graduated from Macomber Vocational... View Obituary & Service Information

The family of Gerald "Jerry" Westphal created this Life Tributes page to make it easy to share your memories.

Gerald “Jerry” Walter Westphal passed away peacefully in the...