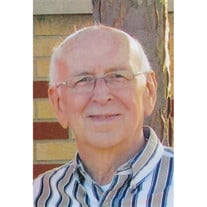 After a five-year battle with cancer, Jerry Young, 77 of Toledo, passed away on Saturday, May 23, 2015 in his home surrounded by his loving family. Born April 27, 1938 to Lillian and Cletus Young, Jerry attended St. Agnes Grade School and graduated from Macomber High School. He married Marie Jarchow in 1957. He was employed by the City of Toledo Division of Water, Coca-Cola Bottling Company and retired from Frito Lay in 2000. He was a long-time parishioner at the Most Blessed Sacrament Parish where he served as president of the Holy Name Society and Parents Association as well as chairing numerous social functions for the parish. He was also an usher at Christ the King Parish for the past 27 years. Jerry was Past Grand Knight and an active member of the West Toledo Council Knights of Columbus where he was an active Trustee and president of the Building Board. He organized and led the K of C Lenten Fish Frys for the last 20 plus years. Jerry enjoyed bowling, card games and spending time at the lake with his family and friends as well as attending his grandchildren’s sporting events. Jerry lived his life for others. Jerry is survived by his loving wife of 58 years, Marie, and his four children Sue (Mike) Zmudzinski, Denise (Mike) Shordt, Anita (Mike) Turner and Jeff (Dawn) Young; grandchildren, Christopher (Julie), Colette (Joe), Casey (Daniel), Samantha (Gary), Danielle, Kimberly, Michaela, Jason (Erin), Jordan, Bradley (Emily), Kyle and Joseph and five great-grandchildren. Also surviving Jerry is his brother, Cletus Young, Jr., sister, Judy (Paul) Camp and sister-in-law, Ruth Young and numerous nieces and nephews. He was preceded in death by his parents and siblings: James, Richard, William and Terrance Young, Jeanne Brauchle and Carol Esper. The family wishes to express heartfelt appreciation to Hospice of Northwest Ohio. Memorial contributions may be made to Hospice of Northwest Ohio or Helping Hands of St. Louis. Visitation will be Thursday, May 28th from 2:00pm-8:00pm at Ansberg-West Funeral Home, 3000 W. Sylvania Avenue, with recitation of the rosary at 7:00pm. Mass of the Resurrection will be celebrated at Christ the King Church at 10:00am on Friday, May 29, 2015. Interment will follow at Ottawa Hills Memorial Park. Condolences may be left for Jerry’s family at www.ansberg-west.com

After a five-year battle with cancer, Jerry Young, 77 of Toledo, passed away on Saturday, May 23, 2015 in his home surrounded by his loving family. Born April 27, 1938 to Lillian and Cletus Young, Jerry attended St. Agnes Grade School and graduated... View Obituary & Service Information

The family of Gerald Francis Young created this Life Tributes page to make it easy to share your memories.

After a five-year battle with cancer, Jerry Young, 77 of Toledo,...