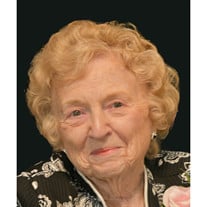 Gerry Zink, 90, passed away on April 30, 2017, surrounded by her loving family in her home in Toledo, where she lived for 63 years. She was born in Toledo, Ohio, on September 27, 1926. She was a born storyteller and often entertained her grandchildren with tales of her childhood spent in the Polish neighborhood with her brothers and sister. At Libbey High School, she met and fell in love with Ted Zink. He called her "Duchess" and even once wrote it with footprints in the snow outside her classroom window. Two years later, in 1944, they were married while Ted was home on leave from the U.S. Navy. They were married for 47 years before his passing in 1991, but she spent the rest of her life loving him. They raised two daughters, Darleen and Nancy, and later had 5 grandchildren and 11 great-grandchildren to spoil. During WWII, Gerry worked at Willys Overland riveting airplane wings alongside her mother, Jenny. After the war, she worked in retail for many years at Lamson's and LaSalle's department stores in downtown Toledo, and later at Elder Beerman. Gerry's greatest joy was always her family and friends. She was known for her cherry and peach pies, cookies, and a beef roast that was named "Grandma Meat" by her grandchildren many years ago. A silly name that stuck for a dish that became a family tradition. No one left her house without a full belly and a full heart. Gerry's brother once gave her the nickname "Mother Theresa" because she would go out of her way to help anyone in need. She was caring and kind and easily made friends anywhere she went. She was preceded in death by her husband, Francis "Ted" Zink, her mother Jenny Matuszek Rittichier, her brother Virgil (Esther) Rittichier, and her sister Annette Rittichier Hager. Gerry leaves behind her brother Robert (Gail) Rittichier, brother-in-law Bud Hager, daughters, Darleen (Ralph) Johnston, and Nancy (Tom West) Zink, grandchildren Lori Wood Carroll, Seth (Beki) Johnston, Brian (Julie) Wood, Sarah (Monty) Hilderbrand, and Mark Johnston, 11 great-grandchildren, several nephews, a favorite niece, and many extended family members and friends. We will miss her greatly. In honoring Gerry's wishes, services will be private. Arrangements entrusted to the Ansberg-West Funeral Directors, (419) 472-7633. The family would like to thank ProMedica Hospice for their excellent care and compassion, especially nurses Tim and Terri. Please consider them if you wish to make a memorial donation. Online condolences may be sent to the family at www.ansberg-west.com

Gerry Zink, 90, passed away on April 30, 2017, surrounded by her loving family in her home in Toledo, where she lived for 63 years. She was born in Toledo, Ohio, on September 27, 1926. She was a born storyteller and often entertained her grandchildren... View Obituary & Service Information

The family of Geraldine Zink created this Life Tributes page to make it easy to share your memories.