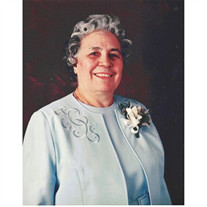 Georgia K. Petros passed away at Ebeid Hospice Residence on Friday, January 16, 2015. Born on April 16, 1921, to George and Katherine Papageorgiou in Galata, Nemea, Greece, she married Konstantine Gus S. Petros in 1947, immigrated to the United States and was proud to become a U.S. Citizen. Georgia was a member of Holy Trinity Greek Orthodox Cathedral and a member of Young at Heart. She was employed at Schauze and Zyndrof’s Bakeries, and retired from the Environmental Services Department at Flower Hospital. Georgia was a beloved mother and “Yiayia”. She was loving and kind to everyone; always caring more about her children, grandchildren, great grandchildren than she did about herself. Georgia was an excellent role model and did a phenomenal job of raising her seven children after the death of her husband Konstantine in February 1967. She was also preceded in death by her daughter Demetra Petros, son-in-law Ken Bertok, four brothers and two sisters. She is survived by her sons, Konstantine and Sam Petros, daughters Kathy (Denny) Lawrence, Evangeline Biggs, Faye (Nino) Miracola, Tina Bertok; grandchildren Brad (Carrie) and Nick Lawrence, Holly, John, Chris and Stephanie Biggs, Anthony and Danielle Miracola, Alec Bertok, Michael and Nicole Petros; great grandchildren Sarah and Ethan Lawrence, Georgia and Flora Stephens, Noah Sancrant, Evangeline Kriegel, Bethany and Lilly Bovee; sisters Demetra Stroplos and Polyxeni Krandas; and many nieces and nephews. Visitation will be on Monday from 3:00 to 8:00 PM, with a 7:00 PM Trisagion Service at Ansberg-West Funeral Home, 3000 Sylvania Ave, Toledo 43613. Funeral will be held at 11:00 AM at Holy Trinity Greek Orthodox Cathedral, 740 N. Superior St. Interment will follow at Toledo Memorial Park. Memorial contributions may be made in Georgia’s name to Holy Trinity Greek Orthodox Cathedral, 740 N. Superior St., Toledo, OH 43604

The family of Gerogia Petros created this Life Tributes page to make it easy to share your memories.