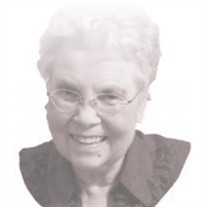 Glenita Rosebery-Domansky, 84, of Toledo, passed away Friday, February 19, 2016, at Hospice of Northwest Ohio. Perrysburg. She was born May 5, 1931, to Eva and Leo Arnold, of Jay County, Indiana. On June 18, 1950, she was married to Darrel Dailey, a career Naval Officer. They were stationed at Great Lakes, IL for 3 years, where she was employed in Civil Service. In June of 1953 Darrel was assigned to the Office of Naval Attaché in Casablanca, FR. Morocco, N. Africa. They resided in that area, where Glenita was employed by the Corps of Engineers at the Nouassour Air Force Base. Upon the drowning death of Darrel on February 27, 1954, Glenita returned to the U.S. to await the birth of their only child, a daughter, Lynita. In 1955, Glenita was married to Calvin “Cal” Rosebery, Jr. of Portland, IN. The couple soon relocated to Toledo, OH. To this union was born a son, David Rosebery. Glenita studied Dental Assisting at a Chicago school. Upon completion of those studies, she was employed in the office of Dr. C.N. Moulopoulos, as a chairside assistant for thirteen years. In 1968, Cal established Rosebery Dental Lab, along with other enterprises. Glenita worked with her husband in all ventures. With the onset of Cal’s illnesses, in 1983, Glenita assumed management of these endeavors. After six years of frequent hospitalizations, Cal succumbed to multiple organ failure on July 3, 1989. When Cal was hospitalized for nine months in 1986, several Department Directors asked Glenita to write of the experiences the couple had weathered during Cal’s struggle to survive. Thus came about the publication of “AGAINST GREAT ODDS – LOVE FOUND A WAY”. This book was dedicated to health care providers the world over; especially The Toledo Hospital. A year following Cal’s death, Glenita retired from all their activities, donating the lab to the third world country of Haiti, through International Services of Hope. In 1991, Glenita was united in marriage to Edward Domansky. With this union, she enjoyed a level of serenity and security for 21 years. Throughout the remainder of her life, Glenita dedicated her time to helping others, especially those involved in serious health problems or human loss. There had been so much kindness extended to her during her times of distress and she felt the best way to reciprocate was to pass it along the best way she could. She volunteered several years for The Kidney Foundation of NW Ohio as well as the Arthritis Foundation, the Ronald McDonald House, Toledo Hospital and Flower Hospital. Glenita was a member of Epworth United Methodist Church. She found great joy in her gardening of her lilies of all kinds and her beloved dogs. She was preceded in death by her parents and brother, Glenwood. Survivors include her daughter, Lynita (Gary) Bigelow-O’Connor of Maumee; son, David (Andrea) Rosebery; step-daughter, Margaret Freeman of New Jersey; brothers, Gerald (Marilyn) Arnold of Geneva, IN and Larry Arnold of Ballwin, Missouri; grandchildren, Bradley Bigelow, Laura (Scott) (Bigelow) Sauerbier, Brian Bigelow, Bryn Rosebery, and great-grandson, Dane Sauerbier. Friends are invited to gather on Saturday, from 11 a.m-1 p.m., in the Ansberg-West Funeral Home, 3000 Sylvania Avenue, (between Secor and Douglas Roads), where a memorial service will follow at 1 p.m. In lieu of flowers, please consider a donation to Hospice of Northwest Ohio, 30000 East River Road, Perrysburg, OH 43551 or the American Heart Association. The family wishes to thank the staff of Hospice of Northwest Ohio, Perrysburg Campus, for their compassionate care. Online condolences may be sent to the family at www.ansberg-west.com

The family of Glenita Rosebery-Domansky created this Life Tributes page to make it easy to share your memories.