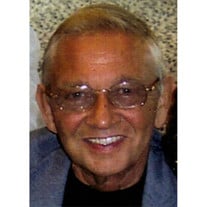 Grant “Bud” Gose, 80, passed away June 16, 2015 at home. He was born August 8, 1934 to Grant and Minerva Gose in Toledo. He attended Toledo Public Schools until moving into the Washington Local District beginning with his eighth grade year. He quickly made many friends, some of whom still meet monthly for breakfast. They like to be referred to as the “ROMEOS”, which stands for Retired Old Men Eating Out. Bud graduated from Whitmer high school, class of 1952. He excelled on the football field, earning the moniker “Galloping Gose”. He served as President of his class each of his four years. After graduating from high school, Bud and his friends spent time on the rodeo circuit before he entered the Army where he served his Country from 1955-1957. He returned home from the Service and began working in the family business, Gose & Son Market, until it was sold in 1993. During that time, Bud also coached the Shoreland Firebirds Football team for 25 years, touching the lives of many young players. Bud then went to work for Washington Local Schools, starting as a Safety Aide and then moved into custodial work at various schools. He was known to whistle constantly while he worked; therefore anyone needing him knew exactly where to find him. Due to health issues, Bud retired from the school system in 2006 and, after a brief time away he returned to Shoreland School to volunteer. There he became affectionately known as “Kernel Bud” for his practice of making popcorn for the students every Friday, where he dressed in crazy hats and shirts to coordinate with holidays and other special events. Bud was an avid Buckeye fan, to the extent of purchasing and decorating his red truck to show his pride. You knew he was close by when you heard his horn loudly playing the Ohio State fight song. Bud enjoyed attending Whitmer football and basketball games, as well as many other school functions. However, his real pride and joy came from supporting his two granddaughters at their gymnastics and track and field meets. His two trips to Las Vegas on Amtrak were also high on his list, along with the Mudhens, movies, horseraces, bowling and playing cards. Bud is survived by his loving wife of 57 years, Sharon; Son, Tim Gose; Daughter, Jami (Scott) Sievers; Granddaughters Megan and Erin Sievers; Sister, Pat (Don) Smith and many Nieces and Nephews. Friends are invited to visit from 11:00am to 8:00pm Monday June 29, 2015 at Ansberg-West Funeral Home, 3000 Sylvania Avenue, Toledo, Ohio 43613 where services will commence at 7:00pm . Family only interment at Toledo Memorial Park. Donations made to Whitmer Athletic Boosters or Donor’s Choice. Condolences for Bud's family may be expressed online at www.ansberg-west.com

Grant &#8220;Bud&#8221; Gose, 80, passed away June 16, 2015 at home. He was born August 8, 1934 to Grant and Minerva Gose in Toledo. He attended Toledo Public Schools until moving into the Washington Local District beginning with his eighth... View Obituary & Service Information

The family of Grant Edward Gose created this Life Tributes page to make it easy to share your memories.