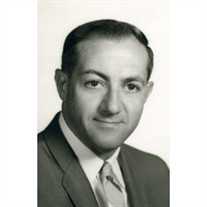 Gus G. Matthews, 87, passed away Wednesday, September 22, 2010, at Ebeid Hospice Residence in Sylvania, Ohio. He was surrounded by family and passed away peacefully. Survived by his wife Eugenia, children Gregory G. Matthews (Elaine), Christos G. Matthews (Rachel), his loving grandchildren Isabella Christina, Konstantinos Christos and Konstantinos Gregory. Preceded in death by his parents Gregory and Irene Matthews and his brother John Matthews. Gus was born in Bellaire, Ohio, on April 12, 1923, but resided the last 75 years in Toledo. After his father passed away Gus, alongside his brother John, sold papers for The Toledo Blade from the age of 14 to help support their mother and aunt. Gus was drafted to the Army and honorably served in World War II. Then went back to work for The Toledo Blade for a total of 37 years. He was an active member of the Holy Trinity Greek Orthodox Cathedral of Toledo his entire life. Gus met Eugenia and married in Athens, Greece on September 1st 1966 and recently celebrated their 44th anniversary. Gus was a loving husband, father, friend and provider. He enjoyed being a season ticket holder of the University of Toledo Football team and watching The Ohio State Buckeyes. He loved spending time with his grandchildren and told lots of life stories, walking with his friends, traveling and reading The Toledo Blade. Gus belonged to AHEPA (American Hellenic Educational Philanthropic Association) for 50 years and was also a member of the American Legion where he enjoyed many Friday night fish dinners. Gus was also a member of the Tenedian Brotherhood. The family will be receiving friends at Ansberg West Funeral Home 3000 W. Sylvania Ave. from 4 pm to 9 pm with AHEPA service at 6 pm and Trisagion service at 7 pm on Sunday September 26th 2010. Funeral services at 11 am September 27th 2010 Holy Trinity Greek Orthodox Cathedral. Burial immediately following at Toledo Memorial Park. The family suggests donations to Holy Trinity Greek Orthodox Cathedral Memorial Fund and to ProMedica Hospice.

The family of Gus Matthews created this Life Tributes page to make it easy to share your memories.