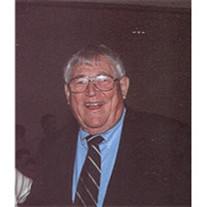 VAN DEUSEN (Howard) William (Howard) William Van Deusen, age 87, passed away October 26th at Heartland Hospice in Perrysburg, Ohio. William was born January 23, 1925 in Painesville, Ohio, to Howard and Grace (Oldrieve) Van Deusen. Bill had been confined to a wheelchair after suffering a stroke in December of 2006. While at Heartland of Perrysburg, Perrysburg, Ohio, he fell and broke his hip which required surgery. He contracted pneumonia, which left his body unable to recover. Bill graduated from Mentor High School in 1943. He served in the U.S. Navy as a radio operator, stationed in Guam. He returned from WW II and married his high school sweetheart, Marjorie Jayne, on July 10, 1948. After playing football at Case Institute of Technology for one year, Bill attended Albion College, where he also played football. He received his Bachelor of Arts Degree, with a minor in Education in 1952. While pursuing his Masters, he was a Graduate Assistant. He also helped being an assistant football coach, as well as head swimming and baseball coach. He was affiliated with Sigma Nu Fraternity. Returning to Painesville, Ohio in 1954, Bill was appointed head football coach at Riverside High School. He later transferred to the Wickliffe school system. While there he was a teacher, coach, and later the high school principal. Bill started working for Jostens in 1965. He transferred to Toledo in 1968. It became a family run business for over 30 years, making so many friendships along the way. Bill was such a fun-loving individual. He enjoyed vacationing with family and friends on Ft. Meyers Beach, Fl. and Traverse City, MI. He sure loved entertaining a crowd. Bill was best known for his meatballs and spaghetti dinners or grilling a huge 6” thick steak on the grill. Each fall, whether it be at Hueston Woods (Miami University) or tailgating at UM, he would provide chili and hot dogs. For years he would host a Run for the Roses Derby Party, leading the crowd to sing “My Old Kentucky Home”. Bill liked being outdoors. There were several fishing trips and snowmobile rides. At home he enjoyed gardening ??" trying for the best tomato or perfect rose. Though he loved and raised St. Bernard's years before, he was content providing treats for the neighbors dogs and having Dugan (stuffed puppy) at his side. Left to cherish his memory are his wife of 64 years, “Pudge”, son Tom (Nancee), granddaughters, Brittany (Scott) Hauptman, and Kerri Van Deusen. His great grandchildren Tanner and Ryan Hauptman will also miss their “Bubba”. He is also survived by many nieces, nephews, and good friends. Services will be private. A celebration of Bill's life will be announced at a later date. Memorial contributions in William's name may be made to the charity of the donor's choice. To leave a special message for the Van Deusen family, please visit online at www.ansberg-west.com.

The family of H. William Van Deusen created this Life Tributes page to make it easy to share your memories.