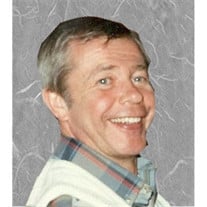 Harry Russell “Russ” Fitts, 85, passed away on March 22, 2016, at St. Clare Commons in Perrysburg, surrounded by family. He was born in Toledo on September 27, 1930, to Theresa Gurney and Harry Fitts. He was a longtime parishioner of Gesu Catholic Church. Russ got a job in a shoe store on Adams Street at the age of 17, and sold shoes his entire career. He managed the Hardy Shoe Store on Adams Street, then managed the men's shoe department at The Lion Store and worked in the men's shoe department at Dillards. Preceding Russ in death was his wife, Imie, and sister, Geraldine Burton. He is survived by his children, Kathy (Dave) Well, Marty (Cameron) Fitts; daughter-in-law, Vicki Fitts; grandchildren, Andy Well, Brian Fitts, and Becky Fitts. Visitation will be at 9:00 a.m. on Thursday, March 31, 2016, at St. Clare Commons, 12469 Five Pt. Road, Perrysburg, with the Mass of Christian Burial following at 10:00 a.m. Interment will be in Resurrection Cemetery. The family suggests tributes be made to St. Clare Commons, in lieu of flowers. Arrangements have been entrusted to the Ansberg-West Funeral Directors. To send the family online condolences, please visit www.ansberg-west.com

The family of Harry Fitts created this Life Tributes page to make it easy to share your memories.