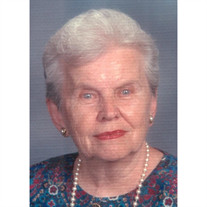 Helen Andrzejewski, age 91, died peacefully on Friday, May 13, 2016. She was born on September 24, 1924 in Toledo, Ohio to Casimir and Lottie (Zawierucha) Marciniak. Helen graduated from Libbey High School in 1943 and went to work at Tiedtke's. She married Joseph M. Andrzejewski on July 20, 1946 foreshadowing the moon landing 23 years later. They celebrated 46 years together until his passing in 1991. After raising her 2 sons, she worked as head teller at United Savings & Loan for over 20 years. Helen was a loving mother, grandmother and great grandmother who enjoyed spending time with her family and friends. She is survived by her loving sons, Harley Andrews (Marcy) and Randal Andrews (Cookie Westmeyer) and granddaughter, Vanessa (Bill) Wilson and great grandchildren Joseph and Sarah. Also, survived by her loving companion Jerry Getz and numerous nieces and nephews. In addition to her parents, she was preceded in death by her husband, Joseph, her sister, Hyacinth Sobczak, and her brother, Gene Marciniak. The family would like to extend a special thank you to the staff at Kingston of Perrysburg for their compassionate care and support where Helen spent the last 4 years of her life. Visitation will be held at Ansberg-West, 3000 Sylvania Ave, Toledo, on Wednesday, May 18 from 2PM to 8PM. On Thursday, Mass will be held at Christ the King Church, 4100 Harvest Lane, Toledo at 10AM with visitation at the narthex of the church at 9AM. Internment will be private. For those wishing to make a kind expression of sympathy in lieu of flowers, please consider a donation to the STAFF of Kingston of Perrysburg, Hospice of Northwest Ohio, or Christ the King Church.

Helen Andrzejewski, age 91, died peacefully on Friday, May 13, 2016. She was born on September 24, 1924 in Toledo, Ohio to Casimir and Lottie (Zawierucha) Marciniak. Helen graduated from Libbey High School in 1943 and went to work at Tiedtke's.... View Obituary & Service Information

The family of Helen Andrzejewski created this Life Tributes page to make it easy to share your memories.