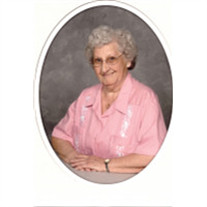 Helen V. Binkley, passed away January 6, 2013 at her home. She was born January 14, 1923 to John and Cora Wetzel in Ilion, NY. She came to Toledo in 1943 and worked in the Carton Dept. of Libbey Glass for 36 ½ years before retiring in January 1985. She was a member of Augsburg Lutheran Church since 1967, the Golden Emblem Club of Libbey, the Libbey Women's Club and the City Auto Retiree Club. She enjoyed gardening, flowers, reading, doing puzzles and watching soap operas. She was always there to help anyone out and had many friends. Helen is survived by her son, Garry and his wife, Jan; her 5 loving grandchildren, whom she lived for, Jason (Tiffany), Ryan (Vickie), Aaron, Brandon and Katheryn, her only granddaughter; 4 great grandchildren, Cameron, Aiden, Kyleigh and Adriana; brother, Loren (Janet) Wetzel of Leroy, NY and many nieces and nephews. She was preceded in death by her husband of 46 ½ years, Nathan, in 1991 and her 4 brothers and 4 sisters. Friends are invited to visit from 3:00 to 9:00pm Wednesday at the Ansberg-West Funeral Home 3000 Sylvania Avenue where services will be held 1:00pm Thursday with Rev. Donald Brewer officiating. Interment in Ottawa Hills Memorial Park. Online condolences may be left at www.ansberg-west.com

The family of Helen V Binkley created this Life Tributes page to make it easy to share your memories.