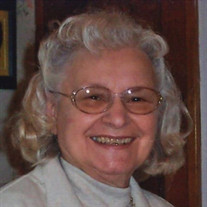 Helenegene Wenninger departed this life in the arms of her loving family on Good Friday, March 30 at the age of 94. Helenegene was born in Aliquippa PA, the seventh child born to Slovakian immigrants Michael and Theresa Stacho. She graduated from Aliquippa High School. She then attended the University of Pittsburgh until she answered the call to serve her country during World War 2. She was in the first Battalion of the United States Marine Corps, serving three years at Hunter College Training Camp, Camp LeJeune, and Quantico Virginia. She met her husband, Deacon George Wenninger while in the Corps. He preceded her in death. Upon discharge from the Corps, she raised her family and returned to school. She received her B.Ed. from Mary Manse College, in Toledo and Masters in Education from the University of Toledo. She was inducted into the Phi Kappa Phi Honorary Society. She began her teaching career at St. Clement School, and over the years taught at St. Catherine, Lincoln, and Whittier. Helenegene supported Deacon George in his ministry at St. Anthony Parish in Temperance as a lector, extraordinary minister, Baptismal and Lector Instructor, and choir member. After retirement, Helenegene volunteered at the Toledo Museum of Art and at St Anne's Hospital. These jobs brought her much happiness. She enjoyed fishing trips with her grandson and Sunday dinner and cards with her family. In her final years, Mama was the Prayer Matriarch of her family. She was a daily communicant at St. Clement Church, with special devotion to the Divine Mercy and Blessed Mother. She was instrumental in procuring the college education of all her children and grandchildren. She lived independently until her final illness. She was faith filled. She was fearless. She was selfless. Helenegene is survived by her children, grandchildren, and great grandchildren. Memorial Mass will be celebrated Saturday, April 21, at 10:00 am, at St. Clement Church, 3030 Tremainsville Road. Ansberg-West Funeral Directors (419) 472-7633.

Helenegene Wenninger departed this life in the arms of her loving family on Good Friday, March 30 at the age of 94. Helenegene was born in Aliquippa PA, the seventh child born to Slovakian immigrants Michael and Theresa Stacho. She graduated... View Obituary & Service Information

The family of Helenegene Wenninger created this Life Tributes page to make it easy to share your memories.

Helenegene Wenninger departed this life in the arms of her loving...