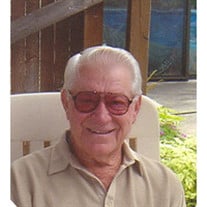 Henry B. Rumschlag, 84, of Toledo Ohio passed away on March 26, 2009 in Venice Florida due to complications of Melanoma Cancer. Hank was a graduate of New Riegel High School. He joined the Navy in 1943 and served his country honorably for three years in the Gilbert Islands as a Coxswain. He was a resident of Toledo where he was employed as a Marketing Manager for the Standard Oil Co. for 42 years. He joined the Gesu Catholic Church in 1957 where he was active while raising his family. He was a life member of the Knights of Columbus. Hank loved to go fishing, bowling, gardening, playing the piano and chord organ, guitar, singing, and especially playing card games. He was a devoted husband and father. Preceding Hank in death were his parents, John and Emma Rumschlag, his first wife Maxine Rumschlag whom he was married to for 53 years, brothers, Charles, Raymond, Herbert; sisters, Marsela Pottinger, Margaret Clemens and Eleanor Moffit. He is survived by his loving family, wife, Shirley Ann; children, Charles (Joyce), James, Douglas (Lin), Robert (Mary), Mary Ann (Gerry) Soviar, Laura (Rick) Michalak, Janice (Robert) Stainbrook, Rebecca Alvarado; brothers, Floyd, Orland (Deanna), Johnny (Sally); 24 grandchildren, 17 great grandchildren; sister-in-law JoAnn (Bud) Elchert, Mother-in-law Leona Cook and several nieces and nephews. His love and devotion to God and his family will always be remembered. We will miss his happy smile and especially his HUGS! Family and friends are invited to visit on Monday from 2:00-9:00PM in the Ansberg-West Funeral Home, 3000 Sylvania Ave. where Rosary prayers will begin at 4:00PM. Funeral services will begin on Tuesday at 11:00AM at Gesu Church. Rev. James Cryan Officiant. Interment in Calvary Cemetery. Those wishing to make memorial contributions are asked to consider Boys Town P.O. Box 6000 Boys Town NE., 68010, Hospice of Northwest Ohio, or the charity of the donor's choice.

Henry B. Rumschlag, 84, of Toledo Ohio passed away on March 26, 2009 in Venice Florida due to complications of Melanoma Cancer. Hank was a graduate of New Riegel High School. He joined the Navy in 1943 and served his country honorably for three... View Obituary & Service Information

The family of Henry B. Rumschlag created this Life Tributes page to make it easy to share your memories.