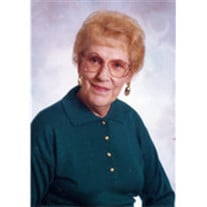 Our beloved mother, Irma Louise (Grigg) Ziefle passed away on Sunday, August 30, 2009. Leaving behind to cherish her memory are daughter Marlene (Dave) Malson, son Bill (Julianne) Ziefle, daughter Patricia, grandson Chris (Andrea) Malson, granddaughter Elizabeth Malson, great-granddaughter Ashley, great-grandson Joshua, brother Tom Grigg, sister Betty (Len) Spadafora, special niece Barb, and many dearly loved nieces and nephews too numerous to mention. She was preceded in death by her sisters, Mary and Alma, and her step father, Harley Boday. Irma was born on April 14, 1927 to the late Thomas Neal Grigg and the late Effie Grigg Boday. She was raised in Toledo and moved to Charleston, West Virginia, in the early fifties. She lived there many years and enjoyed the beauty and majesty of the hills. She worked several jobs in WV before retiring from United Parcel Service. Irma returned to Toledo in 1992, moving into Pelham Manor. She was very involved with activities there (working part time in the office, acting as resident manager, planning and decorating for events, decorating bulletin boards, starting Bingo and Skippo games, etc). She loved her apartment and really enjoyed her many friends at Pelham. Irma's family would like to thank the doctors and nurses at UTMC and Regency Hospital of Toledo for their tender care during her last few weeks of life. Irma will be sorely missed by her family and many friends. Services will be 11 AM Wednesday at the Ansberg-West Funeral Home, 3000 Sylvania Avenue where the family will receive friends from 2-4 and 6-8 PM Tuesday. Interment Ottawa Hills Memorial Park. Remembrance is a golden chain death tries to break, but all in vain. To have, to love, and then to part is the greatest sorrow of one's heart. The years may wipe out many things, but some they wipe out never. Like memories of those happy times when we were all together.

The family of Irma Ziefle created this Life Tributes page to make it easy to share your memories.

Our beloved mother, Irma Louise (Grigg) Ziefle passed away on...