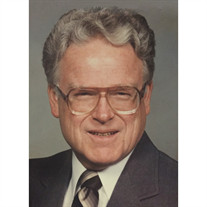 Jac S. Smith, 87, passed away on March 26, 2016, at the Lutheran Village at Wolf Creek, in Holland Ohio. He was born in Toledo on December 1, 1928 to Leon C. and Claudine (Agler) Smith. He married Phyllis (Holland) Smith on April 19, 1958. Jac served his country honorably in the United States Air Force during the Korean War. Jac grew up on the Smith family farm in Martin, OH. He was a 1946 graduate of Genoa High School and attended Bowling Green State University where he majored in music, his favorite instrument being the piano. Jac retired from Conrail, formerly the Pennsylvania Rail Road. He started there, as a yard clerk, and he later became a systems analyst while living in Philadelphia. He and his wife were avid motorhome campers and enjoyed travelling together and meeting countless friends along the way. Jac had a lifelong passion for music and could pound-out the best-improvised piano Boogie Woogie imaginable! He enjoyed nothing more than spending time with his family and friends. Jac is survived by his loving wife of 57 years, Phyllis Smith; son, John (Tina) Smith and granddaughter Gianna Smith of Philadelphia, PA; siblings, L. Paul Smith of Martin, OH, Richard (Gloria) Smith of Winter Haven, FL, Donald (Margy) Smith of Rockford, MI, Nancy (Ralph) Neeper of Woodbridge, VA, as well as, numerous nieces and nephews. He was preceded in death by his brother and sister-in-law, Mahlon “Bud” (Betty) Smith, and sister-in-law Eliza L. Smith. Jac was a member of the Church of St. Andrew UM. Per his wishes, there will be no visitation. The family will hold a private celebration of his life at a later date. Arrangements have been entrusted to the Ansberg-West Funeral Directors, 419-472-7633. To send his family online condolences, please visit www.ansberg-west.com.

The family of Jac S. Smith created this Life Tributes page to make it easy to share your memories.