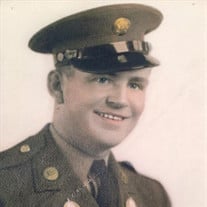 James Walter Carmony Sr., 100 ,passed away peacefully at the Franciscan Care Center in Sylvania, Ohio, during the evening hours on Friday, November 8, 2019. Born in Ewing, Virginia, on May 13, 1919, Walter, as he was known to his family and closest friends, was the son of John and Lula Carmony. With thirteen brothers and sisters, James found it necessary to leave home at an early age in order to provide financial assistance to his family. He first joined the Civilian Conservation Corps (CCC) and later enlisted in the United States Army serving over four years(1941-1945)in the European Campaign landing on the beaches of Normandy in the third wave. Honorably discharged with the rank of Master Sergeant, James returned home, eventually marrying Carrie Lee (Browning) Carmony of Lowell, Kentucky, who passed away in May of 2000 after a marriage of over 50 years. They had one son James W. Carmony Jr. of Cayuta, New York. James eventually met Irene Holt of Swanton, Ohio and the two were married on December 28, 2002. While his departure from home prevented him from obtaining a formal education, his life experiences enabled him to become a hard-working, dedicated, and devoted son, husband, father, grandfather, and friend. Upon completion of his military service, James moved to Toledo where he was employed as a machine operator with the Dura Company for over thirty years. Later, he was employed by Emmanuel Baptist Church and Schools as well as St. Clement Church and School. James truly enjoyed making others happy and giving to them of his time and talents. He enjoyed gardening and cooking, making sure that others had an abundance of vegetables, both fresh and cooked. James truly enjoyed writing poetry about his early life experiences and his walk with the Lord. He also loved to sing often leading the Westwood Baptist Church congregation in Sunday worship services and singing solos. James is survived by his wife, Irene (Holt) Carmony; son, James Walter Jr. (Rita); stepdaughter, Patricia (Bob) Nejvara;granddaughters, Heather (Randy) Musgrove of Perrysburg, Ohio; Ashlee (Vince) Nealis of Austin, Texas and their mother, Mary Carmonyof Toledo, Ohio. He was blessed with six great-grandchildren, Ryan, Zoey, and Wyatt Musgrove and Noelle, Colton, and Parker Nealis. Step-grandchildren, Tom (Marla) Nejvara, Leighann (Ray) Sisler, Christopher Nejvara,and seven step great-grandchildren. The family will receive friends at the Ansberg-West Funeral Home, 3000 Sylvania Avenue from 3:00 p.m. to 8:00 p.m.Thursday, November 14, 2019. Services will be 10:00 a.m.Friday, November 15 at Emmanuel Baptist Church, where friends are invited to visit after 9:00 a.m. Interment will follow at Toledo Memorial Park. In lieu of flowers, the family requests that memorial contributions be made in James’s name to Great Lakes Caring Hospice Foundation, 900 Cooper Street, Jackson, MI. 49202; Franciscan Care Center Sylvania, 4111 Holland Sylvania Road, Toledo, Ohio 43623, or Emmanuel Baptist Church, 4207 Laskey Road, Toledo, Ohio

James Walter Carmony Sr., 100 ,passed away peacefully at the Franciscan Care Center in Sylvania, Ohio, during the evening hours on Friday, November 8, 2019. Born in Ewing, Virginia, on May 13, 1919, Walter, as he was known to his family and... View Obituary & Service Information

The family of James Walter Carmony Sr. created this Life Tributes page to make it easy to share your memories.

James Walter Carmony Sr., 100 ,passed away peacefully at the...