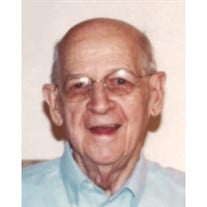 James J. Eaton, age 100 was embraced by Christ on March 20th 2015 surrounded by his family at the West Toledo home he built and lived in for over 50 years. Jim was born in Toledo on February 2nd 1915 to James and Malvina (Ranger) Eaton. He graduated from St. Mary’s Grade School, attended Central Catholic High School and was a graduate of Toledo Vocational School where he was the first student council president. Jim worked for Autolite and was a tool and die inspector for 27 years for the GM Hydromatic plant in Toledo retiring May 1st 1982. As a young man he was a member of the St. John Society. He was a member of the Most Blessed Sacrament Parish for 65 years. Jim is preceded in death by his parents, James and Malvina Eaton; brothers, Robert, Donald (Peggy) and John; sisters, Rose and Elizabeth “Betty” (Paul); wife, Marjorie;sons, James and Thomas; grandsons, Bret & Dan Mininger, Michael Smith and John Buckenmeyer. Jim is survived by his daughters, Patricia Mininger, Diane Smith, Kathleen Buckenmeyer, Mary Beth (Gary) Holewinski; daughter-in-law, Connie Eaton; grandchildren, Pamela (Randy) Paredes, Joe Buckenmeyer, James Eaton, Angela (Ken) Crabtree, Thomas, Shelly & Brian Smith, Edward Holewinski; six great grandchildren, Miranda, Nickolas, Alisha, Brooke, Ian and Logan and sister-in-law, Jane Eaton. He loved singing his favorite songs, sharing funny stories, reminiscing about family vacations, prime rib and danish. He greatly loved his Most Blessed Sacrament Parish where he had been a Eucharistic minister, lector and sacristan; helping with everything from cleaning and changing the candles to making sure the lights were on and that everything was just right for funerals. He also served and represented the parish on diocesan committees, served on the fundraising committee for the church renovation and visited shut-ins. Friends and family may visit from 2:00pm to 8:00pm on Wednesday March 25, 2015 at Ansberg West Funeral Home, 3000 Sylvania Avenue, where a Scripture Service will be held at 7:00pm. Prayers will be recited at 10:30am Thursday March 26, 2015 at Ansberg West Funeral Home followed by the Mass of the Resurrection at 11am at the Most Blessed Sacrament Church. Entombment at Resurrection Cemetery. Memorial tributes in memory of Jim may be made to Most Blessed Sacrament Parish or Easter Seals. Special thanks to Hospice of NW Ohio. Condolences may be left online for Jim’s family at www.ansberg-west.com

James J. Eaton, age 100 was embraced by Christ on March 20th 2015 surrounded by his family at the West Toledo home he built and lived in for over 50 years. Jim was born in Toledo on February 2nd 1915 to James and Malvina (Ranger) Eaton. He... View Obituary & Service Information

The family of James J. Eaton created this Life Tributes page to make it easy to share your memories.