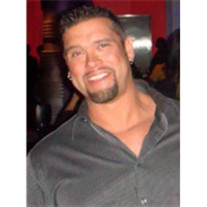 James “Jamie” T. Follas, 43, of Toledo passed away unexpectedly on Saturday, June 16, 2012. He was born in Toledo, OH on November 15, 1968 to James T. and SusanFollas. Jamie attended Whitmer High School where he met many of his dearest friends whom he remained loyal to until the end. He was a hardworking man, who enjoyed the freedom of being self-employed. His most recent work allowed him to travel around the U.S. and the Caribbean. An avid Ohio State and Detroit Tiger fan, Jamie lived life to the fullest. Be it the sunny beaches in Mexico or the cold metal seats in “The Shoe” in November, Jamie was always happiest surrounded by friends and family, being the guy making everybody laugh until they cried. Known to his friends by many different nicknames, “Big Jim” was a rough and tumble guy on the outside, but a teddy bear at heart as his many friends will attest to. He is survived by his loving father, Jim (Sherry) Follas, mother,Sue (Jim Kaltenbach) Follas, his brother Andy (Jamie) Follas, his beloved niece and nephew, Izzy and Mickey; step brothers Scott (Alix) Kozak, Jeff (Christie) Kozak, Michael Kozak, Kim Constantino, Michael Constantino, and Jeff (Nicole) Constantino, as well as nieces, nephews, aunts, uncles, cousins and many dear friends. Family & Friends will be received at Ansberg-West Funeral Home at 3000 W. Sylvania Ave, in Toledo OH, on Friday June 23rd from 2-7p.m. A private interment will be held at Toledo Memorial Park, for family at a later date. In lieu of flowers, memorial contributions may be made to Hospice of Northwest Ohio, 30000 E. River Rd., Perrysburg, OH 43551 or to a charity of the donor's choice. Online condolences may be shared at www.ansberg-west.com

The family of James Follas created this Life Tributes page to make it easy to share your memories.