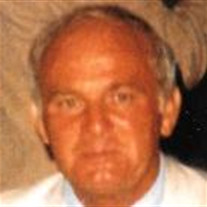 On Thursday, January 24, 2019, James Richard Hays, loving husband and father of two children, passed away at the age of 89, Jim was residing at Sunset Village Assisted Living in Sylvania, OH. Jim was born January 14, 1930, in Toledo, OH, to Harry "Jim" and Juanita (Schwanzl) Hays. He grew up in Toledo attending Blessed Sacrament, Central Catholic High School (1947) and the University of Toledo (1951) on an athletic scholarship. Jim was an outstanding athlete excelling in football and track at Central Catholic and the University of Toledo. While at UT he was a star running back, defensive backfield player and selected MVP. Jim still holds numerous UT Football records that have held up for 60+ years. His UT number one record of 7.73 average yards per carry (1950) was only recently topped in 2014. It still stands at the number two position. His 90 yard punt return record (1949) stands today at the number two position. Jim was also invited to play in the 1950 East-West Shrine Football Game for outstanding college senior players. In 1951, Jim signed with the Chicago Bears, after turning down offers from the New York Giants and the now defunct New York Yanks Football Club. This was at a time when there were only twelve NFL teams with rosters of approximately 30 players. He was ultimately released from the Bears due to injury. Until his death Jim remained loyal to both UT and the Chicago Bears. He was also a member of Phi Kappa Psi Fraternity. In 1949, Jim married the love of his life, Sharyn (Cruey). He joined the United States Marine Corps in 1951, attending Officer Candidate School, before being stationed along with Sharyn in Quantico, VA and the Marine Corps Air Station at Cherry Point, NC, where daughter, Cynthia was born. After, active duty in the USMC, Jim and Sharyn moved back to Toledo where son, James JR "Chip" was born. He remained in the USMC Reserves until 1965. Jim joined the civilian work force teaching history and coaching football at Toledo Rogers High School and boys track at Roy C. Start High School. He eventually chose a career with the City of Toledo, working primarily as an administrator in Labor Relations, retiring in 1984. Jim always remained loyal to UT and after retiring volunteered his time as an administrative assistant to the UT Football Team and as the Interim Head Coach for the UT Women's Cross Country team. In retirement, Jim and Sharyn also loved to winter in Naples, FL. Jim was recently preceded in death by his wife of 69 years, Sharyn (November 9, 2018); father Harry; his mother, Juanita; and his in-laws, Minnie and Wayne Cruey; and sister-in-law, Diane. He is survived by his two children, Cindy Leffler and Jim Jr (Tara) Hays; grandchildren, Matt and Nick Leffler and Clint and Shayne Hays; brother, Tom; niece Melinda and numerous cousins. Family and friends are invited to celebrate Jim and Sharyn, Wednesday, January 30, from 5-8 pm, Ansberg-West Funeral Home, 3000 Sylvania Avenue, (between Secor and Douglas Roads), Toledo, OH. Committal services will take place on Thursday, January 31, at 11:00 am, Ottawa Hills Memorial Park, 4210 Central Avenue, Toledo, OH. Online condolences may be sent to Jim’s family at www.ansberg-west.com

On Thursday, January 24, 2019, James Richard Hays, loving husband and father of two children, passed away at the age of 89, Jim was residing at Sunset Village Assisted Living in Sylvania, OH. Jim was born January 14, 1930, in Toledo, OH, to... View Obituary & Service Information

The family of James Richard Hays created this Life Tributes page to make it easy to share your memories.