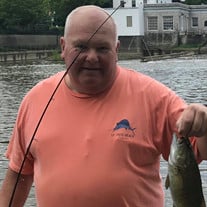 James “Jim” Alexander Hall of Toledo, Ohio, lost his courageous battle with recent medical issues on December 23, 2020, surrounded by his loving family. Despite his unfortunate obstacles, Jim came out a warrior, stayed strong until the end, and faced every life challenge with a smile. Jim was born on January 22, 1955 and graduated from DeVilbiss High School in 1973. He married the love of his life Debbie, on October 24, 1980. At an early age, Jim exemplified hard work and dedication in all aspects of life. He was proud of his career, retiring in 2016, as the owner and master mechanic at Larry’s Car Care. He was the handiest of men, and there was nothing that he could not fix. Jim was an avid fisherman and loved long drives gazing out at the vastness of Lake Erie with his wife and dogs. His biggest accomplishment was being a teacher to his children and grandchildren, as he always looked forward to seeing them “turn the next page” and “climb the next rung of the ladder.” As a husband, father, brother, grandfather, uncle, and friend to many, he will be dearly missed. He was preceded in death by his parents, Robert and Barbara Hall. James is survived by his wife, Deborah; children, Barbara (Christopher) Bauer, Robert (Kelcee) Hall; grandchildren, Liam, Camden, Hallee, Brooks, and Baby Hall #2; sister, Kathleen (Richard) Kulakowski; niece and nephew, Kendall and Richard; and many other family members and special friends that adored him. Please join Jim’s family and friends, for a prayer service at Ottawa Hills Memorial Park, on Monday, December 28, 2020, at 1 p.m. In lieu of flowers, please consider contributions in Jim’s name to The Ohio Department of Natural Resources or The Alliance for the Great Lakes. Arrangements have been entrusted to the Ansberg-West Funeral Directors, 419-472-7633. To send his family online condolences, please visit www.ansberg-west.com.

The family of James "Jim" Alexander Hall created this Life Tributes page to make it easy to share your memories.