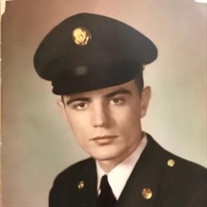 James "Jim" Albert Pool, 83 of Toledo, beloved father, grandfather, and friend passed away on Monday, March 1, 2021 surrounded by his family. Jim, the son of Madeline and Arnold Poole was born on April 17, 1937 in Brooklyn, New York. Jim spent his early childhood in Continental, Ohio before the family relocated to Toledo. Jim graduated in 1955 from DeVilbiss High School and served in the Army Reserves before starting his career in the grocery industry. He worked for Joseph Family Grocery Stores for many years and served as a broker for Harold Lincoln Food Brokerage for 30 years as well. Jim's work ethic was always described as unmatched. In addition to having a long professional career, Jim also volunteered his time as a Shriner and Freemason and gave generously to many organizations that benefited others. While spending time with his family and friends meant the most to him, he could also normally be found watching Western movies, working in his yard, walking daily at Meijer or enjoying black coffee somewhere! Jim will forever be remembered as the guy everyone knew, the one most likely to make you laugh with his quick wit and story telling and one of the most genuine people you will ever meet. To lose a person of that magnitude is always difficult, as Jim would say it is not goodbye simply "Adios for now." Jim is survived by his son Jim (Kelly) Pool; grandchildren: Abbi & Ellie Pool and Brooke & Mason Neundorfer; Brother, Doug (Laura) Poole; niece, Nicole Butler and nephew, Michael Poole. He was preceded in death by his parents Madeline and Arnold Poole. The family would like to thank the staff of St. Anne's Mercy Hospital for their kindness and compassion during Jim's final days. In lieu of flowers, please consider a donation to the Shriner's Hospital. Visitation will be held on Monday, March 8, 2021 from 2:00-8:00PM at Ansberg-West Funeral Home, 3000 W. Sylvania Ave. Masks will be required for entry and social distancing practices followed. Private funeral Services will be Tuesday, March 9th with final resting place at Woodlawn Cemetery. Due to current conditions caused by the ongoing pandemic, we are offering a Live Stream of the Funeral for Jim beginning at 9:15am on Tuesday, March 9, 2021 for those who wish to attend virtually. To view the video Jim’s Funeral, please CLICK HERE.

The family of James "Jim" A. Pool created this Life Tributes page to make it easy to share your memories.