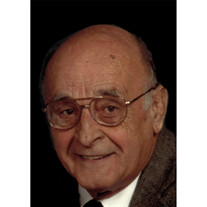 James R. “Jim” Smith, 91, of Sylvania, passed away Wednesday, June 14, 2017, at the Franciscan Care Center. He was born June 3, 1926, in Toledo and was the son of Henry and Hilda (Lewen) Smith. Jim was a WW II Navy Veteran and served honorably in both the Pacific and Atlantic and was on the commissioning of the Robert L. Wilson. He was a lifelong member of the Most Blessed Sacrament Parish and was one of the first to be baptized there. Jim worked at the Lucas County Sanitation Department, as chief draftsman, before retiring. Jim was a member of the Toledo Power Squadron where he served as an officer. He was also a founding member of the Toledo Muzzleloaders Club and the VFW. Jim enjoyed camping, traveling, winemaking and woodworking. Survivors include his wife of 68 years, Virginia Smith; daughters, Susan Smith, Sandra (Bob) Belkofer and Becky (Pat) Connors; grandchildren, Heidi (Jason) Malkiewicz, Jodi Connors, Nancy Belkofer and Katie (Mark) Morris; 5 great-grandchildren, his sister, Nancy Moriarty and numerous nieces and nephews. He was preceded in death by his grandson, Ben Connors. Family and friends are invited to visit on Friday from 2-8 p.m., at the Ansberg-West Funeral Home, 3000 Sylvania Avenue, (between Secor and Douglas Roads). Prayers will begin on Saturday at 9:30 a.m. from the funeral home followed by the funeral mass at 10 a.m., at the Most Blessed Sacrament Church, 2240 Castlewood Drive at Bellevue Road. Interment will follow at Calvary Cemetery. Memorial contributions may be made to the Most Blessed Sacrament Church or the Franciscan Care Center. The family would like to thank Ohio Living Hospice and their caregivers, Ellen, Naomi and Ann for the wonderful care given to Jim. Online condolences may be made to the family at www.ansberg-west.com

The family of James "Jim" R. Smith created this Life Tributes page to make it easy to share your memories.