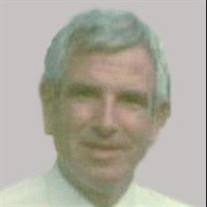 James Francis Machen, 91, passed away November 7, 2020, at his home. He was born in Toledo on May 23, 1929, the son of Edwin and Leona (Lehr) Machen. He grew up in the Old West End and attended Rosary Cathedral Grade School and Scott High School. He attended Illinois Institute of Technology in Chicago and returned to attend the University of Toledo, where he graduated magna cum laude in 1952 with a B.S. degree in mechanical engineering. He became a teaching fellow at the University of Michigan where he earned a master’s degree in engineering in 1958. In 1964, he obtained a Master of Business Administration degree from UT. He started in 1953 at the Electric Auto-Lite Co. in Toledo as a junior engineer. In 1954, he began teaching as part-time lecturer in engineering graphics in the College of Engineering at UT. He later taught mechanical design and mechanism courses. During a break in teaching, he was a design engineer for Brown Trailers, Inc. and later was a sales engineer for Toledo Scale Co. During summers and part time, he worked for the consulting firms, Delos Palmer & Assoc., Davey, Kahn and Assoc,,and Autotec, Inc. He returned to UT as assistant professor and later associate professor of mechanical engineering. Eventually, he became assistant dean of engineering in charge of UT's pre-engineering program and retired as professor emeritus. He was an inventor at heart, and over time was awarded 11 U.S. patents. On the side and full time, he had a small manufacturing business, Machen Products Co., where he produced the Steady/Rest ladder attachment, old-fashioned decorative light bulbs, and a tight folding butterfly chair. He also enjoyed helping others in developing new products and devices. In the 1970’s, he learned Spanish and traveled in Latin American where he met his wife, Mariella Mendez. They were married in Bogota, Colombia in 1980. In his semi-retirement, he taught junior and senior courses in UT’s engineering technology program. Around that time, he developed a unique type of plastics extruder, the “Extrusor,” which is covered by two of his patents. A state funded research program was conducted at the UT Polymer Institute on prototypes of the Extrusor. He remained a life-long Catholic and was active in Corpus Christi University Parish as a lay minister, and earlier at Rosary Cathedral. In the 70’s, he was active with a housing rehab group, Community Rebuilders, Inc. He is survived by his cherished wife, Mariella and son, David, both of Toledo. He was preceded in death by his brother, Edwin and sisters, Rosemary and Joan. The funeral mass will be celebrated on Thursday, November 12, 2020, at 10 a.m., at Corpus Christi University Parish, 2955 Dorr Street. Fr. Jeremy Miller will officiate. Interment will follow at Resurrection Cemetery. Memorial contributions may be made to Hospice of Northwest Ohio or Cherry Street Mission. The family would like to thank the caregivers at Hospice of Northwest Ohio for the wonderful care given to James. Ansberg-West Funeral Directors (419) 472-7633.

James Francis Machen, 91, passed away November 7, 2020, at his home. He was born in Toledo on May 23, 1929, the son of Edwin and Leona (Lehr) Machen. He grew up in the Old West End and attended Rosary Cathedral Grade School and Scott High School.... View Obituary & Service Information

The family of James Francis Machen created this Life Tributes page to make it easy to share your memories.