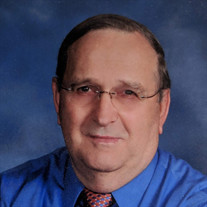 Jim Olejownik, 82, of Sylvania Township, passed away peacefully March 18, 2019. No more desirous of meeting his end than any of us, Jim would nonetheless have smiled that he drew his last breath beside the love of his life and wife of over 54 years, Mary Jo, in the home they had built together a half century earlier. Born to Leo and Helen Olejownik, Jim grew up in Toledo’s Polish north end. As the lone boy among four sisters, he acquired at an early age what would be his most perfect skill: listening. Jim’s formal education began at St. Vincent de Paul Catholic Church as a student and altar boy, and where, years later, he would hold his first teaching position. A paper route and job at Stanley’s Market funded Jim’s high school years at Central Catholic, where he graduated in 1956. An innate love of learning and the inspiration from several now forgotten but eternally thanked teachers propelled him to earn degrees from Bowling Green State University, the University of Toledo, and the University of Michigan in education, social work, and child psychology. Jim then enjoyed a long and rewarding career in the Michigan school system, first as an elementary teacher, then school social worker and psychologist. It was in these latter capacities that he found his greatest satisfaction. As a boy Jim had himself suffered a traumatic head injury and could empathize with children who were struggling. With his patient ear and easy going manner, he showed kids that their current difficulties were issues to be worked through, not permanent impediments to happiness and success. Though loathe to admit it, deep down, Jim knew he was a pretty lucky guy; lucky with the ladies anyways. All throughout his life, the eldest in the family, Claire, most like their mother Helen of the siblings, conveyed to Jim that big sis-little brother love that can’t really be described. A call or letter from Claire, or from one of her children, reminded him that someone had been thinking about him, worrying about him, loving him since before he could remember. Thank you, Snyder family. 1963 was the luckiest year of Jim’s long life because it was then that he met the woman with whom he would share the rest of his days. An elementary school teacher herself, Mary Jo’s quick smile and outgoing personality would prove the perfect complement to Jim’s more naturally sober disposition. Together they built a home, raised three children, travelled extensively, battled each other across a scrabble board, and spent more time in grocery stores than any sane couple should. But together, always together. Beside Jim’s favorite recliner sits a photograph of his baby girl. A baby no more, his daughter Jennifer smiles back at him in her PhD cap and gown from his beloved Ohio State University, a mirror image of Jim’s belief in perseverance and education. Sweet, smart women from cradle to grave. You don’t get luckier than that. We love you Dad-Pop Pop-Uncle Jim-Mr.O. You did good. Jim was preceded in death by his parents, Leo and Helen, and sister, Olivia. He is survived by his wife, Mary Jo; children, Jennifer (Nick), Jerry, and Jeff (Celia); cherished grandchildren, Lennox and Ayala; sisters, Claire, Helen, and Veronica; and numerous nieces and nephews, cousins, and friends. Family and friends are invited to visit on Thursday, April 4, 2019, at St. Clement Catholic Church, 3030 Tremainsville Rd. Toledo, OH, from 12:30 p.m. until the Funeral Mass at 1:30 p.m. Interment will follow at Calvary Cemetery. Memorial tributes may be made to Nature’s Nursery, P.O. Box 2395; Whitehouse, OH 43571. Or, better still, practice an extra bit of patience with your loved ones; Jim always did. Ansberg-West Funeral Directors, (419) 472-7633.

Jim Olejownik, 82, of Sylvania Township, passed away peacefully March 18, 2019. No more desirous of meeting his end than any of us, Jim would nonetheless have smiled that he drew his last breath beside the love of his life and wife of over 54... View Obituary & Service Information

The family of James S. Olejownik created this Life Tributes page to make it easy to share your memories.