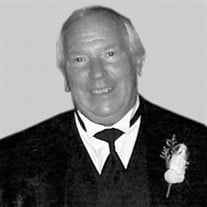 James L. “Skip” Wernert Jr., 69, passed away Monday, February 23, 2015, at Flower Hospital. He was born January 30, 1946, to Rosemary and James L. Wernert Sr. in Toledo. Skip attended Rosary Cathedral Elementary School, was a member of the 1964 graduating class of Central Catholic High School and attended the University of Toledo for 3 years before being drafted. He honorably served his country in the Army during the Vietnam War as a chaplain’s assistant.Skip retired from the City of Toledo, Water Division in 2010 after 20 years of service. He had a lifelong love of the theater, he won the iocesan Best Actor award in CYO, and was a longstanding member of the Cathedral Players, Fireside Players and Half-Ass Productions. He was especially proud of writing and directing the Fireside production of “Danny Boy.” A longtime member of Blessed Sacrament Church, Skip was also known as the mayor of the upper side of Close Park. Skip is survived by his loving wife of 45 years, Mary Kay Wernert; son, Michael (Dawn) Wernert; daughter, Rebecca (Robert) Figley; grandsons, Reece and Brice; brothers, Tony (Kay) Wernert of Lincoln City, OR, David (Kathy) Wernert and Steve (JoAn) Werner of Toledo; many nieces and nephews; Richard (Pam) Lynch, Pat Lynch; dear and longtime friends, Bill and Kathy Poznanski, Steve Dixon and top dog, Maggie. He was preceded in death by his parents; daughter, Nancy, and brothers-in-law, James Wall Jr. and Bill Lynch. Friends are invited to visit from 2 p.m. to 8 p.m. Thursday at Ansberg-West Funeral Home, 3000 Sylvania Avenue where the Rosary will be recited at 7 p.m. Mass of the Resurrection will be celebrated 10 a.m. Friday at Blessed Sacrament Church with Monsignor Michael Billian officiating. Interment will follow in Resurrection Cemetery. In lieu of flowers, memorial contributions may be made to Central Catholic High School or Blessed Sacrament Church. Condolences may be left for Skip’s family online at: www.ansberg-west.com

The family of James L. Wernert created this Life Tributes page to make it easy to share your memories.