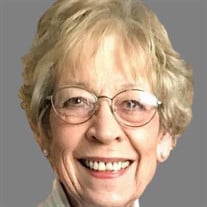 Jean Calmes Morgenstern celebrated her 86th birthday on Friday evening, dining with a daughter and grandson after a day of receiving calls and cards from family all over the country. A photo taken that night captured her vitality, beauty and happiness. Unfortunately, the matriarch of a blended family, Jean came to the end of her life as independently as she lived it: She called an ambulance for herself just before 1 a.m. Sunday, November 24, 2019. She passed peacefully from a heart attack a short time later. Born Carmelita Jean Feehan in McComb, Ohio, on November 22, 1933, she delighted in the uniqueness of her birthdate, 11-22-33 -- Jean grew up on a farm near Deshler, the daughter of John Feehan and Marie Krebs Feehan. Her father was part of a large Irish clan, her mother the daughter of German immigrants. After Jean graduated in 1951 from Deshler High School, where she was a good student, band member and cheerleader, she moved to Toledo. She did some local modeling and got a clerical job at the Internal Revenue Service. There she met a Treasury agent, James William Calmes. They married on June 13, 1953, at Our Lady of Perpetual Help Catholic Church. The couple, active parishioners at St. Clement Church, had four children and Jean was nine-months pregnant with their fifth when Jim suddenly died in April 1966. By 1969 she’d been introduced to William J. Morgenstern, a widower with four children. In September of that year was the debut of “The Brady Bunch,” the iconic television series in which a widow and widower marry and bring together six children. Two months later, on Jean’s birthday, she and Bill married at Christ the King Catholic Church and merged their nine kids. Despite enough rough episodes for their own TV sit-com, the merger became a very close family. For years, they lived on Kingsmoor Drive in West Toledo, spending their summer weekends escaping to fish the shores at Catawba Point. Their little slice of heaven was just feet from the Lake Erie shoreline with a gorgeous view toward the Miller’s Ferry docks and South Bass Island. After the kids were grown and gone, Jean and Bill downsized to the condominium in Sylvania Township. They traveled to Texas, California and Washington, D.C., visiting grandchildren. In 1998, she lost Bill to a sudden heart attack. Thereafter Jean liked to say that she lived with “two angels” on her shoulders, Bill on one, Jim on the other. For the past two decades, Jean lived alone but was frequently in the company of her children and grandchildren, now being doted on by them. She enjoyed trips to area casinos, either with friends or her daughters who also live in Toledo. In 2004, Jean was featured in The Wall Street Journal, in an article about Ohio’s pivotal role in that year’s presidential election by her daughter Jackie Calmes, then a Journal White House correspondent; mother and daughter went to the VFW post that Bill had joined, interviewing members there about the approaching election. In 2009, when Jackie had joined the New York Times, Jean went to the White House Christmas reception as her “date” and was photographed with President Barack and Michelle Obama. As the grandchildren began marrying in recent years, she was a popular and much-photographed attraction at their wedding receptions, dancing to the Rolling Stones and mimicking Mick Jagger well into her 80s, and earning the nickname, “Jean, Jean, the Dancing Machine.” That reflected what granddaughter Carrie Hutcheson called “the two defining parts of her: family and fun. There’s a reason we are all so darn loud and lively. She was the precedent.” Jean is survived and mourned by her five children, Jackie Calmes, Pat (Tim) Cotton, James (Marta) Calmes, Cathy Calmes and Connie (Norm) Szakovits; stepchildren, Marcie (Larry) Tscherne, Rob (Rose) Morgenstern and Steve (Rhonda) Morgenstern; eighteen grandchildren. She also was preceded in death by her parents; her older sister, Joan Pilewski, and in 1986, stepson Tim Morgenstern (Lynne Marshall). Jean's final selfless act was to donate her body to science through The University of Toledo's Anatomical Donation Program for medical education and scientific purposes. Family and friends are invited to visit on Sunday from 1-7 p.m. at the Ansberg-West Funeral Home, 3000 Sylvania Avenue, (between Secor and Douglas Roads), where a "Sharing of Memories" will be at 6 p.m. A memorial mass will be held Monday at 10 a.m. at St. Clement Church, 3030 Tremainsville Road. In lieu of flowers, memorial contributions may be made to Cherry Street Mission, 105 17th Street, Toledo, OH 43604 or the Toledo Humane Society, 827 Illinois Avenue, Maumee, OH 43537.

Jean Calmes Morgenstern celebrated her 86th birthday on Friday evening, dining with a daughter and grandson after a day of receiving calls and cards from family all over the country. A photo taken that night captured her vitality, beauty and... View Obituary & Service Information

The family of Jean Calmes Morgenstern created this Life Tributes page to make it easy to share your memories.