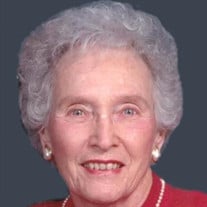 Jean L. Smith died on July 19, 2018 at Parkcliffe Community. She was born on November 29, 1923 in Toledo Ohio, where she grew up. She was the only child of Alpha and John O’Dell Schoeninger. Jean graduated from Blessed Sacrament and St. Ursula Academy. She worked as a secretary at Dupont. Jean married William D. Smith on June 22, 1946. The two of them enjoyed dinner parties, card clubs and traveling the world with their friends. She was a member of the Blessed Sacrament choir, volunteered at St. Vincent Hospital and Meals on Wheels. Jean was preceded in death by her parents and her husband, Bill, of 61 years. Jean is survived by her 3 children Dan Smith (Kay Thompson), Tom (Julie) Smith, and Debbie (Randy) Gensler; ten grandchildren, Mike Smith (Cortney Galdys), Lisa (Russell) Grant, Laurie Smith (Todd Perrine), Jeff (Danielle) Smith, Brian (Julia) Smith, Christie (Josh) Latina, Chad, Aaron, Courtney and Shaun Gensler along with 12 great-grandchildren. We would like to thank Parkcliffe Community and Hospice for the constant care and support they gave to Jean. Visitation will begin on Tuesday, July 24, 2018 at 10:00 am at Blessed Sacrament Church where the Mass of the Resurrection will follow at 11:00 am. Interment will be in Resurrection Cemetery. Memorial contributions may be made to The Most Blessed Sacrament Church. Arrangements have been entrusted to the Ansberg-West Funeral Directors, 419-472-7633. Online condolences may be made at, www.ansberg-west.com.

Jean L. Smith died on July 19, 2018 at Parkcliffe Community. She was born on November 29, 1923 in Toledo Ohio, where she grew up. She was the only child of Alpha and John O&#8217;Dell Schoeninger. Jean graduated from Blessed Sacrament and... View Obituary & Service Information

The family of Jean L. Smith created this Life Tributes page to make it easy to share your memories.