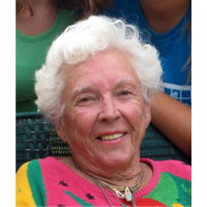 It is with great sadness that we said good bye to our mom Jeanne Hylant Schoen who, with the grace she is known for, left this world on Thursday July 28, 2011 at the age of 88. Jeanne was born on June 13, 1923 to Hildegarde Herring Tillman and Joseph Lambert Tillman in Toledo, Ohio. She was a proud graduate of St. Ursula Academy, Barry College and Ward Belmont College. Jeanne was a woman who was known for her kindness, cheery demeanor and wonderful sense of humor. She had a love of art, painting in particular but had a wonderful talent for needle pointing, a green thumb in the garden and a love for people and festivity. She was the first always to open her home and her heart to “stray” friends who needed a place to land. And in every case these special people were considered family and gave her a lifetime of friendship. Jeanne's most favorite passion was her family. She is the oldest of seven children, mother of nine and stepmother of fourteen. Jeanne had the great fortune of having a life full enough for two people let alone one. She was married on February 2, 1946 to Robert E. Hylant, Sr. and remained so for 41 wonderful years. After his passing in 1989 Jeanne married Richard H. Schoen on December 29, 1991 and began a new chapter in her life filled with craziness, joy, laughter and of course, people. Jeanne was a member of the Toledo Hospital Auxiliary where she was often featured in many style shows. She loved golf and she was a member of Inverness Club 18-holers, golfing until the age of 80. Jeanne was also a member of Gesu Church for most of her life which is where she and Dick Schoen went to mass every morning. One of her favorite groups was “Stitch-n-Bitch”, a collection of lifelong friends which provided more bitching than stitching. Jeanne was preceded in death by her parents, sister Pat Tillman Haag, brother Gerald Tillman, husbands Robert E. Hylant, Sr. and Richard H. Schoen and daughter Polly Hylant Tracy. She leaves behind to cherish her memory and emulate her style Robert (Trude) Hylant, Jr., Patrick (Ann) Hylant, Sr., Daniel (Carol) Hylant, Steve (Karen) Hylant, Geof Tracy, Sandra Hylant, Jeannie (Tom McHugh)Hylant, Michael (Tina) Hylant, Richard (Clare) Hylant, 20 grandchildren, 8 great-grand children, Greg (Sheila) Schoen, Bill (Carol) Schoen, Mary Beth Schoen, Cory Bracken (Jim), Bob (Sue) Schoen, Fritz Schoen, Tom (Lori) Schoen, Janet Adams, Ellen Breininger (Les), Dan (Susan) Schoen, Jeff Schoen, Anne Eddingfield (John), Kate Kelly (Kevin), Julie Dunsmore (Jim), 58 grandchildren and 15 great-grandchildren. God gave Jeanne as a gift to our world for a while and sadly it is time to give her back. We were fortunate not only to have her as a mom but for as long as we did. Please join us in true celebration of her life at Walker Funeral Home for visitation July 31th, 3-8pm and Mass of Christian Burial on August 1 at 11am at Gesu Church, Parkside Blvd. The burial will be private. In lieu of flowers, the family requests donations to one of the following; St. Francis DiSalles High School ??" Robert E. Hylant Memorial Scholarship Fund, St. John's High School ??" Robert E. Hylant Memorial Scholarship Fund or YWCA Pollyball Fund. Arrangements by Ansberg-West Funeral Home.

It is with great sadness that we said good bye to our mom Jeanne Hylant Schoen who, with the grace she is known for, left this world on Thursday July 28, 2011 at the age of 88. Jeanne was born on June 13, 1923 to Hildegarde Herring Tillman and... View Obituary & Service Information

The family of Jeanne Hylant Schoen created this Life Tributes page to make it easy to share your memories.

It is with great sadness that we said good bye to our mom Jeanne...