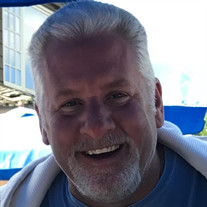 Jeffrey S Miller passed away December 10, 2019 after a long battle with heart disease. Born to Ronald K. Miller and Barbara (Miklosek) on September 9, 1962. Jeff graduated from Roy. C Start High School of Toledo and got a degree in the school of life. He married Jamie Dunlap on June 20, 1992 and that union produced two sons, Devon, 27, and Nikolas, 21, who were his world and with whom he shared a love of classic cars, estate sales, sarcastic humor, and of course the Pittsburgh Steelers. Even though the official marriage ended, he and Jamie remained family and continued to celebrate events and share life together. Jeff was an accomplished painter and landscaper. He had an easy-going nature, was generous, kind-hearted and would do anything for anyone. He became known as “meatball” from the neighborhood kids. Jeff loved to be active and outdoors as much as possible. No matter the season or temperature, if the sun was out he was out. Jeff loved to travel and spend time with his family and friends as much as possible. Greeting him in heaven are his father Ron and step-mother Jan, his brother Randy, and lifelong friend Patrick “Coop” Cooper. Left to cherish his memory are his mother Barbara, his sons Devon and Nik, Jamie, siblings Michael and Laura. Nieces Karly and Annalee, nephew Kyan, and his lifelong friends Bob Dan “Gab”, Tom, Dale, Dylan, Norm, Eddie, Frank, Kris, “Spence”, his “daughter Laurie”, and numerous other friends that he considered family and made memories for life with. Funeral services will be held from 2:00pm until 7:00pm on Monday December 16, 2019 at Ansberg-West Funeral Home, 3000 W. Sylvania. There will be a prayer service to celebrate Jeff’s life at 7:00pm. The family suggests that gifts in lieu of flowers be made to either Humane Ohio or the American Heart Association.

Jeffrey S Miller passed away December 10, 2019 after a long battle with heart disease. Born to Ronald K. Miller and Barbara (Miklosek) on September 9, 1962. Jeff graduated from Roy. C Start High School of Toledo and got a degree in the school... View Obituary & Service Information

The family of Jeffrey S Miller created this Life Tributes page to make it easy to share your memories.