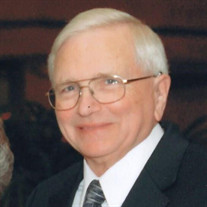 Jerry Dutridge, 83, a precious and loving husband, passed away April 3, 2020 at Ebeid Hospice. He was born August 16, 1936 to Cordon and Maxine (Campbell) Dutridge in Toledo. A graduate of Macomber High School, Class of 1954, Jerry attended Olivet Nazarene University before honorably serving his country in Germany from 1957 to 1959 in the Army. Jerry accepted the Lord as his savior when he was 9 years old and faithfully served him until his death. He was very active in missionary work through the Church of the Nazarene, going on missions to Africa, Haiti, Brazil, Dominican Republic and a Navajo Indian reservation. He later attended Monclova Baptist Church. Jerry “walked the talk”, he was always willing to help others when it was needed, painting, wallpapering or doing whatever had to be done. He was always smiling and had a wonderful sense of humor. He will be remembered as a wonderful caring father to his daughters and son and grandfather to his grandchildren. Jerry is survived by his loving wife, of 35 years, Carol; daughters, Debbie (Darius) Zand of Salt Lake City, UT, Kathy Dutridge of Goodyear, AZ; daughter in law, Selena Dutridge; grandchildren, Monica, Natalie, Oliver, Mia; brother, Eugene (Margaret) Dutridge; step-children, Debra Zeunen, Robert, Jeffrey and Douglas Schultz; 11 step-grandchildren, 19 step-great grandchildren and 2 step great great grandchildren. He was preceded in death by his son, Gary Dutridge; brothers, David, Tom and Bill Dutridge; grandson, Timothy Dutridge; step-grandson, Davy “Chip” Black and step-son in law, Jay Zeunen. A memorial service to celebrate Jerry’s life will be held at a later date. Memorial contributions in his memory may be made to the Monclova Baptist Church Mission Fund.

Jerry Dutridge, 83, a precious and loving husband, passed away April 3, 2020 at Ebeid Hospice. He was born August 16, 1936 to Cordon and Maxine (Campbell) Dutridge in Toledo. A graduate of Macomber High School, Class of 1954, Jerry attended... View Obituary & Service Information

The family of Jerry Dutridge created this Life Tributes page to make it easy to share your memories.

Jerry Dutridge, 83, a precious and loving husband, passed away...