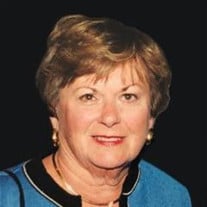 Jill Peterson, age 76, passed away on Monday, November 11, 2019 at her home in Holland, OH due to complications from Parkinson’s disease. Jill was born to Frankie Lee Janvrin Cussins and Leroy Noel Cussins in Decatur, IL on September 19, 1943. When Jill was two, the family moved to Denver, CO where she later attended Abraham Lincoln High School. After being elected student council co-president, she attended the National Student Council Leadership Conference at Camp Cheley in Estes Park, CO. During the weeklong camp, she briefly met another student delegate from Toledo, OH named Larry Peterson. The following summer, she and Larry were selected to serve as junior counselors and were assigned to advise the same group of campers. A year later, during her first week on campus at Bradley University in Peoria, IL, she bumped into Larry in her dormitory living room. They saw their three chance encounters as signs that they were meant to be together -- and so began their love story. After she and Larry were married in Denver, CO in 1964, they took turns going to school full time until they both graduated in January 1966. She graduated Cum Laude in elementary education and was a member of Pi Beta Phi sorority. After graduation, Jill and Larry moved to Glendale, AZ where she taught first grade while he went to the Thunderbird School of Global Management. From there, they moved to Portland, OR where their son, Tad, was born. They then transferred to Peoria, IL where their daughter, Erin, was born. They also lived in Danville and Kewanee, IL prior to moving to Toledo, OH in 1974. Jill was a passionate and dedicated community volunteer. She was a member of the Junior League of Toledo for over 40 years, serving as president in 1989-90. A friend mentioned that she was, a “thoughtful, caring, and experienced leader” and that her “warmth made those who served with her want to do their best.” She also served on the boards of Grace Community Center, Planned Parenthood, the Sight Center, the Toledo Alumnae Panhellenic Council, the Toledo Botanical Gardens, the Toledo Museum of Art Ambassadors (Aides), and the United Way of Greater Toledo. She was a member of Christ Child Society, Sylvania United Church of Christ, Stone Oak Country Club, and the Toledo Pi Phi Alumnae Club. She was also a charter member of the “Old Exec Committee.” For 17 years, Jill co-owned the Kaleidoscope Needlepoint shop, first in west Toledo and then in downtown Sylvania. She loved running her own business and teaching others to needlepoint. Her home always looked stunning at Christmas with her beautiful needlepoint stockings on the mantle and ornaments on the trees. Jill’s greatest passion was her family. She was a devoted wife to her sweetheart, Larry. They were true partners. They encouraged and supported each other and had lots of fun along the way. For their 25th wedding anniversary, they had a “year of celebration” during which they did something special every month, culminating in a grand trip to Hawaii. For their 50th they took several trips down memory lane, returning to Camp Cheley, Bradley University, and every one of the homes they shared throughout their marriage. Jill was a loving mother to her two children and “Mimi” to her four grandchildren, and she treasured her many friends. Jill had a kind heart and a generous spirit. She loved deeply through infinite small gestures— a little note, an encouraging word, a timely hug, a tender glance— and had a calming and reassuring way about her. She will be missed. She is survived by her beloved husband of 55 years, Larry Peterson; son, Tad Peterson; daughter, Erin Peterson; grandchildren Marnie, Tommy, Darbi, and Hadlee Peterson; brother Jack Cussins (Denver, CO), sister-in-law Judy Peterson Wood and brother-in-law Adrian Barton (Tucson, AZ); sister-in-law, Molly Peterson Fitzpatrick and brother-in-law Jack Fitzpatrick (Travelers Rest, SC); and eight nieces and nephews. She was preceded in death by her mother and father. A celebration of Jill’s life will be held on Saturday, December 28 at 10 a.m. at Sylvania United Church of Christ at 7240 Erie St. A luncheon will be held after the service at Stone Oak Country Club until 2 p.m. In lieu of flowers, friends and family are asked to consider a donation to the Junior League of Toledo Endowment Campaign at 27 Broadway St #100D, Toledo, OH 43604 or at www.juniorleaguetoledo.org. Stories, memories, and condolences are greatly appreciated. You may share them at www.ansberg-west.com.

Jill Peterson, age 76, passed away on Monday, November 11, 2019 at her home in Holland, OH due to complications from Parkinson&#8217;s disease. Jill was born to Frankie Lee Janvrin Cussins and Leroy Noel Cussins in Decatur, IL on September... View Obituary & Service Information

The family of Jill Peterson created this Life Tributes page to make it easy to share your memories.