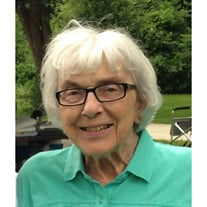 JoAnn E. McCloskey, age 89, passed away peacefully in her sleep at Ebeid Hospice of Sylvania after a year long battle with cancer. JoAnn was born on August 19, 1926 to James and Mayme (Fout) McEwen in Findlay, Ohio. She was a 1944 graduate of Waite High School and attended the University of Toledo for 3 years. She married John T. McCloskey on August 1, 1953 and they had 51 wonderful years together. They met at Gulf Oil where they both worked, and they moved to Venezuela after they were married. After 10 years in Venezuela, they went to Tripoli, Libya and resided there for 11 years, and then spent 4 years in Jakarta, Indonesia where their son Matthew graduated high school from the Jakarta International School. They returned to Toledo in 1978. JoAnn worked for the Washington Local Schools as a secretary at Hiawatha Elementary School, retiring in 1993. She joined the Flower Hospital Auxiliary and was very active with that organization for 18 years. She was President of the Auxiliary in 2006 and was involved with running the Lake Park Gift Shop until 2015. Throughout her cancer journey, JoAnn continued to volunteer at the hospital and looked forward to the days when she could work. JoAnn was especially concerned for the welfare of all animals, especially that they be kept fed and sheltered. She had a special fondness for cats and frequently supported spay and neutering of strays, and herself was mom to 5 cats. JoAnn also enjoyed puzzles, reading, feeding the seagulls at Miracle Mile Shopping Center, and watching her grandsons’ musical performances throughout their high school and college. She was preceded in death by her parents, husband John T. McCloskey, and brothers James and Robert McEwen. She is survived by her son Matthew (Penny) McCloskey, grandsons Braden and Colin, brother Donald (Rusty) McEwen, sister Marilyn Reeves, sister Shirley Douglass, sister-in-laws Doris McEwen and Barbara McCloskey, loving nieces and nephews, and many special friends and neighbors. Visitation will be at Ansberg-West Funeral Home, 3000 W. Sylvania Ave from 2:00-8:00pm on Friday February 12, 2016 where prayers will begin on Saturday at 9:20am and will be immediately followed by the Mass of the Resurrection at St. Clement Catholic Church on Saturday at 10:00am. Interment will be at the Toledo Memorial Park immediately following. JoAnn has requested that memorial contributions be made to The Victory Center or Paws and Whiskers Cat Shelter. To send her family online condolences, please visit www.ansberg-west.com.

JoAnn E. McCloskey, age 89, passed away peacefully in her sleep at Ebeid Hospice of Sylvania after a year long battle with cancer. JoAnn was born on August 19, 1926 to James and Mayme (Fout) McEwen in Findlay, Ohio. She was a 1944 graduate... View Obituary & Service Information

The family of JoAnn E. McCloskey created this Life Tributes page to make it easy to share your memories.

JoAnn E. McCloskey, age 89, passed away peacefully in her sleep...