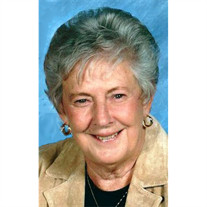 BRAATZ Joan M. She always said “Sometimes you fight and win; other times you lose”. After just over a year of fighting very hard, Joan M. (Gonia) Braatz (83) lost her battle with cancer. She died peacefully at Hospice of Northwest Ohio in the presence of her loving family on August 24, 2014. Joan was born on December 10, 1930; the daughter of Orrin and Hazel (Niurt) Gonia. In addition to her parents, she was preceded in death by her brother, Dale, and son, Mark. A proud 1948 graduate of DeVilbiss High School, Joan continued her friendships with classmates and talked with them frequently. In July 1951, she married Donald Braatz and was a devoted wife, mother, grandmother, and great-grandmother. She was employed over 24 years at Belmont Country Club and enjoyed bingo, cards, bowling, and boating. Joan was a member of River View Yacht Club Ladies Auxiliary and worked many Homecoming events over the years. Joan is survived by husband, Don; daughters, Becki (Lynn) Bair and Pam (Mark) Daniels; grandchildren, Jen, Jeff (Jessica), and David Bair, Ryan (Tori) and Craig Daniels; great-granddaughters, Rachel and Lauren Bair, JoBeth and Raelyn Daniels. The family will receive friends on Thursday, August 28, 2014, from 2-8pm, at the Ansberg-West Funeral Home, 3000 Sylvania Avenue Avenue, (between Secor and Douglas Roads). The funeral will be held on Friday, August 29, 2014 at 10am, at the funeral home. Entombment will follow at Toledo Memorial Park. In lieu of flowers, memorial contributions in Joan’s honor may be gifted to Hospice of Northwest Ohio or the charity of the donor’s choice. Special thanks to Bill and Joann Braatz, Marilynn and Terry Williams, Jean Hall, and good friends in Toledo and Florida for their continued love and support. Heartfelt appreciation to Drs. Pipoly, Desai, and Phinney, Andrea Miller, and the staff at Hospice of Northwest Ohio-Perrysburg, for the kindness and excellent care they provided. Online condolences may be sent to the family at www.ansberg-west.com

BRAATZ Joan M. She always said &#8220;Sometimes you fight and win; other times you lose&#8221;. After just over a year of fighting very hard, Joan M. (Gonia) Braatz (83) lost her battle with cancer. She died peacefully at Hospice of Northwest... View Obituary & Service Information

The family of Joan M. Braatz created this Life Tributes page to make it easy to share your memories.


She always said “Sometimes you fight and win;...