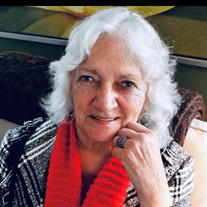 Joan Dionyssiou, a devoted wife, mother, grandmother, great-grandmother, and friend passed away on November 29th, 2021. She resided at the Sunset House Otterbein at the time of her death and passed away comfortably with support of Ashante Hospice. Joan was born Joan Richardson on October 16th, 1933 and is the daughter of Mary Tremules and Harry Richardson. She was a graduate of DeVilbiss Highschool in 1951,and she graduated with high honors with impeccable shorthand ability, which was quite the accomplishment. Soon after she graduated, she got a job at Owens Corning as their secretary. Shortly thereafter she met the love of her life, the late Andreas Dionyssiou, who became her husband of 66 years. They eloped in Angola, Indiana. While her husband was serving in the Korean War, Joan had their first child, Daniel in 1953. Three years later they welcomed their daughter, Paula. This mother of two became actively involved in the Holy Trinity Greek Orthodox Cathedral, and incorporated the Greek heritage into her family traditions. From Sunday school secretary to the daughters of Penelope, she even became the president of the Philoptochos Society. The Orthodox faith became very important to her and she learned to speak, read, write, and cook all of the Greek Traditions. She formed many friendships within this community, acquired godchildren, and even was a koumbara. Those were some of her most celebrated moments. Andy and Joan enjoyed traveling with their children, and visited many places such as Egypt, Cyprus, Greece and Portugal. She had a love of the sea. Eventually they found a home away from home, and purchased a condo in Ft. Lauderdale Florida, which became their winter home. The Caribe was a very special place to Joan and Andy and there she became the women’s club president! She enjoyed hosting numerous parties at The Caribe...her favorite event she put on was the Western Barbeque. Joan and Andy formed many friendships at the Caribe. In the 70s Joan was also employed in the Hudson’s cosmetic department, where she connected with some of her lifelong friends, which she kept close to her heart until the day she died. She had a love for music, dancing, the opera, and the arts. As well as chocolate ice cream! She loved to play tennis, and often did so at the Toledo Tennis Club, as well as Westown. She was involved with the Toledo Art Museum, the Flower Hospital Auxiliary, and the Sapphire Ball Opera Association, and many other local events. She loved going on trips to Vegas with “the girls” and loved seeing Tom Jones, Tina Turner, Diana Ross and even met Julio Iglesias! Joan loved nothing more in this life than her 5 grandchildren who she kept overnight at her house almost every weekend, while they were growing up. She always enjoyed catering to their various personalities, stocking the pantry with their favorite cereal, the freezer with their favorite ice cream, and the refrigerator with their favorite pudding and jello, that she made herself, of course. Thanksgiving dinner was also a huge tradition... she very much enjoyed hosting and cooking for her family. Grape Leaves, Okra stews, homemade bread, she had a passion for cooking. She set the most beautiful tables, roasted the best turkeys, and is still famous for her pecan pies to this very day. After losing her husband in 2017, Joan and her daughter Paula were inseparable. As her dementia progressed, her daughter became her caregiver and entertained her daily with weekly stops to her favorite candy store, playing music together, lunches “out” and car rides to visit her loved ones. Over the years she acquired great grandchildren, 6 to be exact, who she may have loved even more so. Notably, Joan was also a breast cancer survivor. Joan was preceded in death by her late husband, Andreas Dionyssiou; her late brother, Harry Richardson; sister, Betty Romeo; her late son, Daniel Dionyssiou and grandson, the late Andreas Dionyssiou. Left to cherish her memory is her daughter, Paula Dionyssiou; granddaughters, Mara Dionyssiou (Veronica, Charlotte, Francesca, Sebastian Lizcano) Andrea Fries (Sophia and James); grandsons, Anthony (Julia) Mullen and Michael Mullen. The family wants to thank the Sunset House staff and the Ashanti Hospice for their support. What a legacy, what a life, Joan was a lady of class, and a lady of grace. She was gentle and giving. She was adored by all who knew her. We take comfort in knowing she has been reunited with her family members and best friends who have gone before her. I invite each of you to keep her name alive in your hearts. Friends are invited to visit from 4:00p.m. to 8:00p.m. Thursday, December 2, 2021 at Ansberg-West Funeral Home, 3000 Sylvania Avenue, where Trisagion Prayers will be recited at 7:00p.m. Funeral services will commence at 10:30a.m. Friday, December 3, 2021 at Holy Trinity Greek Orthodox Cathedral. Interment will follow in Toledo Memorial Park. Memorial contributions in Joan’s honor may be made to Holy Trinity Greek Orthodox Cathedral or the Alzheimer’s Association of Northwest Ohio.

Joan Dionyssiou, a devoted wife, mother, grandmother, great-grandmother, and friend passed away on November 29th, 2021. She resided at the Sunset House Otterbein at the time of her death and passed away comfortably with support of Ashante Hospice.... View Obituary & Service Information

The family of Joan Dionyssiou created this Life Tributes page to make it easy to share your memories.